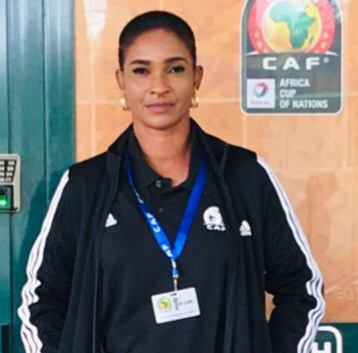 “I used 33 players and 5 goal keepers in 90 minutes against Rivers Angels. The scoreline does not matter – Ann Chiejine said.

” It is not a bad result for a young team. Pre-season Is all about playing friendly matches with different clubs and it affords you the opportunity of selecting the players that are good.

Explaining further to tobexSports she illuminated her strategy for the match.

“We played 38 players against Rivers Angels , I played my real team against Edo Queens and that was why Abia’ Angels scored first and Edo Queens struggled in the match.
Edo Queens with the help of the referee equalised late in the match.

“I can not keep 38 players in the camp without trying them. I used 5 goal keepers and 33 players for the match, the scoreline does not matter to me”.

She explained further that as a grass root coach , she should be able to identify the strength and weaknesses of the players in a grade A match and select players suitable for the league.

“My preparation was based on knowing, training and keeping them fit before, during and after the season.
19 tested players left Abia’ Angels last season, most of these 38 players have not played in the premiership.

“We have a month to the league, my girls gave their best. My pedigree with Abia’ Angels has always been to spring surprises, become spoilers and achieve decent position on the log table. I am satisfied,” She concluded.

You are still under suspension, Ize-Iyamu blasts Oshiomhole

Confident Leone Stars will fall to Eagles in Freetown – Balele...