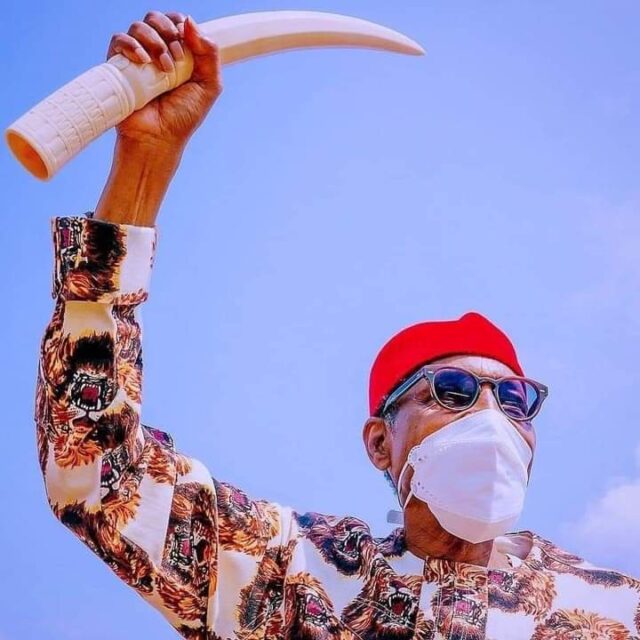 President Muhammadu Buhari has said he would want to be remembered as the Nigerian leader who stabilised the country in the area of security, economic prosperity and triumph over corruption.

The president spoke in Owerri at a town hall meeting with South East leaders during his one-day official visit to Imo state.

He also rated the Igbo as being in charge of the nation’s economy, saying it will be unthinkable that Igbo would leave Nigeria.

Buhari said with less than two years left into his eight-year tenure, security still remains a major priority of his administration.

“If there is no security, there is nothing anyone can do no matter how much you try or the initiative you have. Security is number one priority and then the economy. When people feel secure they will mind their own business,” he said.

The president told South-east leaders that while fighting corruption in Nigeria had become very sophisticated and difficult, he would continue to strive to leave a lasting legacy of integrity and accountability in the system.

“Nobody can accuse me of having companies or mansions anywhere in the country and I thank God that I try to keep myself as clean as possible, so that I cannot be taken hostage.

“I will do my best to ensure that Nigerians that try hard, succeed in their efforts,” he said.

On the forthcoming 2023 elections, the president reaffirmed his commitment to free, fair and credible polls, urging the leaders to honestly educate their constituencies on the need to hold their elected representatives accountable.

Acknowledging the resourcefulness and enterprising spirit of Igbo people, the president said: “The fundamental thing about the Igbo people is that there is no town you will visit in Nigeria without seeing the Igbos being in-charge of either infrastructure or pharmaceutical industry.

“Therefore, it is unthinkable for me that any Igbo man would consider himself not to be a part of Nigeria. The evidence is there for everyone to see that Igbos are in charge of Nigeria’s economy.”

While stating that no country can make any meaningful progress without the development of infrastructure, the president expressed regret that successive governments at the federal level contributed to the decay of critical infrastructure in the country.

He promised that the federal government would complete ongoing key projects in the South-east, including the 2nd Niger Bridge as well as the railway lines and routes linking the region with other parts of the country.

“I firmly believe that when you get infrastructure right, Nigerians will mind their own businesses,” he said, adding that as a group, the Igbos stand to benefit more from the ongoing development of infrastructure in the country because “they are more enterprising.”

Addressing Imo residents at the commissioning of Egbeada bypass named after a prominent son of the state, Chief Emmanuel Iwuanyanwu, the president said he was very impressed with the level of work done by the state government.

He said: “Seeing is believing. I received invitation to come and see what the governor wanted me to see. I have seen it now, justified by his integrity in making sure he is working very hard to get things that are necessary for the good life of the people of the state. I’m really impressed with what he has done.

“I am very pleased with what I have seen and I assure you that at the center, I will help Imo within the Constitution of the Federal Republic of Nigeria.

“I thank you very much for being peaceful and providing the weather for us to go round with the governor to see what he is doing in the state,” the president said.

In his remarks, the President-General, Ohanaeze Ndigbo Worldwide, Prof. George Obiozor assured the President of the continuous support of Ndigbo.

“Ndigbo are committed to Nigerian unity and there is news for those trying to push us out of Nigeria. Ndigbo in Nigeria are like fish in the ocean and no matter how rough the storm is, it cannot drive the fish out of the ocean.

“Mr President, it is in this context, that we see a new dawn in your distinguished presence in Igbo land and believe that on your return to Abuja the significance and substance of this visit will form new foundation of a platform for meaningful dialogue on critical issues of concern to the Igbo nation,” he said.

In his remarks at the town hall meeting, Governor Uzodinma said Ndigbo believed in a united Nigeria predicated on “justice, equity and fairness.”

He thanked the president for addressing the interests of Ndi Igbo through deliberate policy initiatives designed to give the people a true sense of belonging, including the ongoing construction of the 2nd Niger Bridge, among others.

He said the people of the region would remain grateful to President Buhari for approving the establishment of a Naval Base in Oguta local government area of the state, adding that as time unfolds, the economic benefits of the base would manifest.

He expressed joy that the president made the visit, “despite challenges.”

Uzodinma recalled that his administration commenced virtual commissioning of projects in March by Buhari.

He described the projects as strategically and economically important to the people of the state.

“When I took office last year, I undertook a holistic study of the needs of the people.

“I found out that the infrastructure of the state had totally collapsed as almost all road networks were broken.

“Owerri was worst hit with flood sacking most part of the city, while property owners had surrendered to the flood, especially within D-Tiger and Chukwuma Nwoha axis,” he said.

The governor said the second phase of the Naze Road, through Obinze Link Road, which was abandoned for over 15 years, would be inaugurated before the end of the year.

He said his administration had done 46 roads, including the Muhammadu Buhari Avenue, housing the Federal Secretariat.

“We are doing more because we believe that with the right infrastructure, our economic development will be hastened and life would be much better for our people.

“That is what informed our decision to permanently solve the perennial flooding in the capital city, Owerri.

“The balloon-driven tunnel at the base of D-Tiger Road was built to check flooding in the area and to recover property swallowed by flood in the last 20 years.

The governor expressed confidence that Owerri would become flood-free, when the second phase of the projects would be completed.

He said the Egbeada Bypass, also inaugurated by Buhari, would help to ease traffic in the city.

Uzodinma further said the new Executive Council chambers, which was rebuilt after 40 years, was equipped with modern communication facilities to ease policy and decision making.

He thanked the president for his swift response to end the “politically-contrived security breach” in Imo.

Governor Uzodinam further expressed his administration’s commitment to the peace and unity of the country by building a mini-Nigeria within the state.

The News Agency of Nigeria (NAN) reports that the Chairman of the South-East Governors’ Forum and Governor of Ebonyi, Dave Umahi, and Chief Andy Uba, the governorship candidate of the All Progressives Congress(APC) in Anambra, attended the event.

Also in attendance were some ministers and presidential aides from the southeast, the Executive Secretary, National Agricultural Land Development Authority, Mr Paul Ikonne, and other top federal and state government functionaries.

Amidst all this, one of our correspondents reports that the sit-at-home order declared by the Indigenous Peoples of Biafra (IPOB) was still observed.

It was gathered that all streets and roads in Owerri, the state capital were deserted and a few people who were on the roads had to trek long distance to their destinations as vehicles were not available.

Also in Enugu state, the streets were deserted in compliance with the IPOB order.
Blueprint observes that markets, banks and offices were under lock and key, while no commercial vehicle was seen plying the major roads in Enugu.

A businessman who spoke to one of our reporters said the deserted streets was a sign that the region was not happy with Buhari’s APC-led government.

However, Gariki market, Awkunanaw was partially open for business, indicating that some residents might have become impatient with IPOB’s sit-at-home order.

However, to the opposition People’s Democratic Party (PDP), the presidential visit was a “mockery of Imo citizenry.”

The party’s position was contained in a statement by its state publicity secretary, Ogubundu Nwadike.

It said: “We received with mixed feelings the news that President Muhammadu Buhari will visit Imo State on Thursday, 9th September, 2021.

“Ordinarily, a presidential visit is a grand event. It is something every state looks up to given the fanfare and camaraderie that come with. Presidential visit is also significant because it does not come easy. It usually provides the president an opportunity to share the success story of any state being visited. In the light of the foregoing, the people of Imo state are expected to be elated at the prospect of the visit of the president.

“But we note with regret that these familiar feelings and moods are absent in the case of the Presidential Visit to Imo state. Rather than be expectant and elated, the people are actually wondering what the president is coming to do in Imo State.

“Their feeling of loss and consternation derives from the emptiness and despondency that pervades the atmosphere in the state. In recent months, Imo, once a land of peace, was forcibly turned into a theatre of war.”

Ogubundu also said “it is also a well known fact that the governor has done very little to improve the infrastructural status of the state. There are no projects in any sector of the economy. In fact, the little economy the state had has been eroded by bad governance. Today, petroleum marketers in the state have jerked up pump prices of petroleum products because there is no government to negotiate with them over their grievances. In all, the state of affairs in Imo state is appalling and tear-jerking.

Independence Day: Let’s Join Hands to Build the Nigeria of Our Dreams – Dare