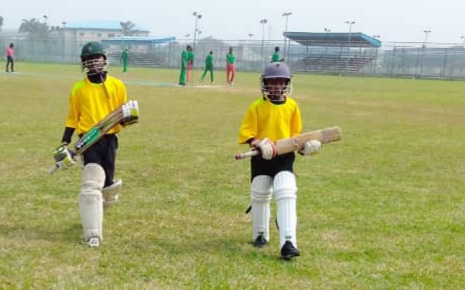 Going into the Sunday finals, Edo fielders choked Akwa Ibom batsmen denying them opportunity to score runs (points) with slow pace bowlers and spinners. The fast hitting Akwa Ibom boys were reduce to score only 69 runs and all out in 14.5 overs. Subdued, Edo team had an easy chase, taking advantage of the pressure on Akwa Ibom, making steady singles and fours with loss of only one wicket. Eventually winning by 9 wickets according to Cricket parlance.

The tournament hosted in Rivers State at the University of Portharcourt Cricket Pitch saw Six states in the South-South Zone compete to represent the Zone at the National Championships which will be staged in Edo State.

In the Female NCF/PwC U17, held at the same venue last week, Team Edo State defeated host state Team Rivers in the finals of 20 Overs.

Another excitement besides trophies, cash and medals was the presentation of kits bag by NCF Vice President, Mr. Uyi Akpata to all six States who participated in the eliminations for cricket development programs.

THE PLACE OF NDIGBO IN NIGERIA

Totori News - December 28, 2020
0
by Diegwu Nwankwor The Nigeria Professional Football League (NPFL) made its return after a seven month absence due to...