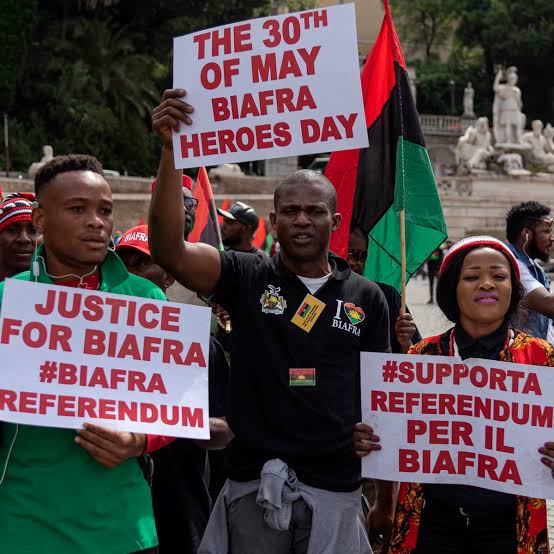 For anyone who believes in Nigeria, particularly those of us Igbos who do, there can be no days tougher than the ones we are currently living in. I tell you, between the growing radicalism at home and the rigid parochialism at the centre, we are caught between a rock and a very hard place. In a way, it feels like a set up. On one hand, those Igbos, hell-bent on secession, taking the actions and inactions of a transient government, as if these actions negatively affect Igbos alone, as an excuse to launch a violent, Igbo-only, struggle against the State. And, on the other, those in government whose minds are still stuck in the Civil War, eager to use the actions of one Igbo group as an excuse to turn loaded guns on all Igbos. Yes. It feels like a set up between two groups hell-bent on re-enacting the Civil War.

Tell me, how did we get to this? Yes. No use tongue-biting. No. It was clear from Day One what sort of government Muhammadu Buhari would run. No use tongue-biting. But there is nothing he has done in office till date that can justify a violent call for secession. Yes, he has been terribly lop-sided in his appointments. Yes, he has poorly managed both pandemic and economic recession. Yes, he has failed to stem the tide of insecurity across the country. But I have never once heard him refer to Igboland as a ‘zoo’, or openly call for the killing of Ndigbo. So, against what exactly are we calling to arms, Ndigbo? Against a government that has religiously followed the Federal Character principle in the distribution of unemployment and insecurity around the country? But instead of couching our struggle in terms that allow common victims – from Zamfara to Bayelsa – to stand together, we offer our heads alone for the gods to use in breaking their cursed palm kernels? Why? As if the fact that, since the War, an Igbo man has never been President, or only once being appointed COAS, has stopped Innoson or Air Peace, or silenced Ochanja, or prevented Achebe from leading to Adichie. Tell me, are we to sacrifice all this – that on any developmental index you choose, the South East is out-performing the North – just to find out whether, if the Civil War is fought again, we will win?

Why? Tell me, why should we risk our present economic and socio-cultural dominance in the world’s largest black nation for an Igbo state – landlocked and, by virtue of our cantankerous exit, surrounded by enemies? No. We belong in Nigeria. I say this without equivocation. We have never had an Igbo state. We have never needed one. Our so-called ‘lack of unity’ has never stopped us from rising like the dust in harmattan. Because of our hard work and enterprise, our curiosity and creativity, our industry and ingenuity, we will always make the first eleven – no how. This is our strength. I tell you. I do not understand this sudden desire to copy the methods of Boko Haram in struggle, or duplicate the Sokoto caliphate in political organization, instead of continuing to hold onto, and build on, our own traditional republicanism. To say we are better than the nomadic Fulani and yet are here copying what we say are his methods to advance our struggle? How? To abandon the altar of our own prime ancestor, Nnamdi Azikwe, and be scrambling to re-define ourselves only in the image of conflict and tragedy? No. We belong in Nigeria. We were here when its foundations were laid. Yes. Our blood join. And leveraging on the opportunities Nigeria has given us to live and trade through its length and breath, we have risen – enemies or no enemies – to formidable heights. I tell you, there is nothing we want in the future – including a State of our own (if you insist) that is on peaceful terms with its neighbours – that we cannot get with the same doggedness that has brought us this far. But WAR IS NOT AN OPTION.

Do you hear? Those misadvising the President to declare martial law. Telling the world that his government has been ‘magnanimous’ in respecting Human Rights. Imagine? It appears you have still not learned from Fela, that ‘human rights na my property, so therefore, you cannot [be magnanimous in giving me] my property’. Imagine? Whoever it was that tweeted that there is a language from the War era that government can speak to silence a dissent that is, ultimately, rooted in glaring injustices everywhere. Imagine? It appears you have still not learned the correct lessons from the hanging of Saro Wiwa, or the murder of Mohammed Yusuf. Please, carry out proper investigations. Anyone who has murdered – or tried to murder – an agent of the state, burnt down – or tried to burn down – an office of the government, broken into – or tried to break into – a government prison, upon such persons bring down the full weight of the Law. But do not, for one second, think that the indiscriminate killing of the innocent, or the extrajudicial killing of the guilty, will kill off a mass movement. No. Listen to Burna Boy please. It will only create monsters.

Yes. Let us – in this hour of our deepest trial – keep faith with Chapter IV of our Constitution. For it is the heart and soul of our humanity.

EXCLUSIVE : I wept when my son scored goal with his head like his father – Kate, late Isaac Promise wife