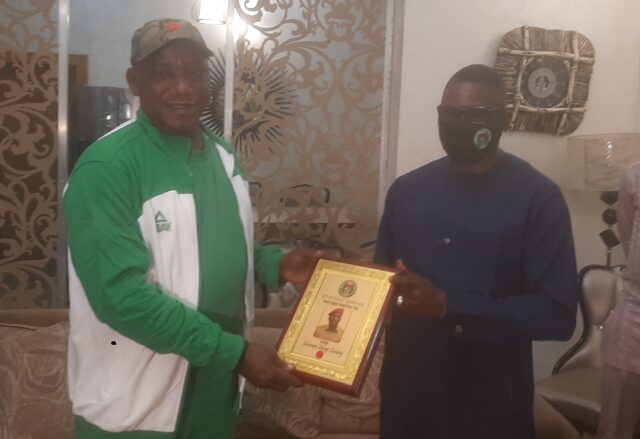 Super Eagles Supporters Club led by his national president, Prince Vincent Okumagba has extolled the contributions of former minister of sports, Bar. Solomon Selcap Dalung to the development of sports in Nigeria by honouring him as its National Patron, www.totorinews.com reports.

The event which was held at the residence of the former minister of sports was very exciting as he ( Dalung) described the honour given to him as very uncommon in Nigerian context where people are hardly remembered after leaving public office, but the Super Eagles Supporters Club are very exceptional with their leadership.

“It’s very uncommon to be remembered by the people you worked for while in the office, who reflect on your modest contributions to their vision and dream,” Dalung said

“I’m Indeed humbled by this visit and of course, the new garment of responsibility given to me as you found me worthy of such” he added.

“The president of Super Eagles Supporters Club and his team have changed the perception of Nigerians of how people generally mischaracterized the group. For I knew, they appreciated the roles played during my tenure in the office particularly my contributions to Development of Sports in the country.

“Coming to look for Me where I have been hiding for years, since  I left the office and crowning me as National patron is heart-racing  and truly noteworthy” he said.

Earlier, Prince Okumagba appreciated the Plateau state -born politician for the sublime roles he played when he was newly appointed the minister of sports in Nigeria which led to the formation of the Super Eagles Supporters Club.

“Myself and all the members of the Super Eagles Supporters Club remembered the the fatherly role Bar. Dalung played to bring harmony to the various factions of the supporters clubs in Nigeria and he gave an equal level playing field to thrive as a newly formed group,” Prince Okumagba said.

“He has been a father figure to Super Eagles Supporters Club. Whenever we cal him, he answers and it is indeed a privilege and honour to have him as our national patron,” he added.

Giving the vote of thanks, Olutoye Orishabiyi, the National Public Relations Officer of the group, appreciated Dalung for his steadfastness towards the development of sports in Nigeria.

“We thank you for your steadfastness to our group and your unwavering development to sports in Nigeria. You have been a supporter of the club from the beginning,” Orishabiyi said.

“We also thank you for accepting our little award. We hope to do more,” he added.

The event had in attendance, Abba Kaka, board member of Nigeria Basketball Federation (NBBF), the national president of the SESC, (Prince) Vincent Okumagba, PRO, Mr. Olutoye Orishabiyi, Musiliu Jimoh Ala, ever reliable  Personal Assistant to the President; and also members of the SESC Abuja chapter; led by Mr. Uche Onuoha Everest and Babadele Damilola Funbi.

Falode gets vote of confidence from NFF, sets the pace for league resumption

Francis Achi - November 20, 2020
0
It is the desire of every father to see his son climbing the ladder of success, but it could also be very...