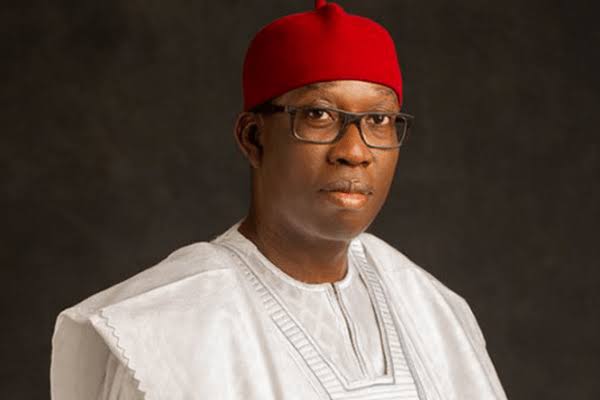 Delta Governor, Senator (Dr) Ifeanyi Okowa, on Wednesday said states in the South-South region were united in the quest for restructuring of the country.
Okowa stated this during his quarterly interaction with journalists on Wednesday in Asaba.
He said that there was need to restructure the country to pave the way for the devolution of more powers to states and local governments.
According to Okowa, who is the Chairman, South-South Governors’ Forum,Nigeria is not making progress as it ought to because the issues of restructuring and resource control are yet to be addressed.
He disclosed that restructuring and resource control as well as security would form a major plank of the discussion at a meeting between a Presidential delegation and leaders of the South-South billed for Port Harcourt on Friday.
“The South-South Governors have been in the forefront for the devolution of power to states and local governments.
“Restructuring, resource control and security of the country, especially in the Niger Delta will be a major topic of discussion at the Presidential parley coming up in Port Harcourt,” he said.
Responding to a question on the Gold deposit in Zamfara and the decision by the state government to control the resource, the governor said that there were Acts of the National Assembly that dealt with oil production and solid minerals.
“We cannot apply laws in such a manner that it becomes discriminatory because you cannot mine solid minerals somewhere in Zamfara and you can’t allow Niger Delta to manage their oil,’’ he said.
On complaints from oil producing communities, he said that there was an ongoing process to ensure that what got to the communities became statutory and enshrined in the Constitution or in the Petroleum Industry Bill (PIB).
Okowa said that governors in the South-South were doing well in managing the 13 per cent Derivation fund to their states.
“The kind of money we spend, especially on road construction in the Niger Delta is very huge compared to what other states spend and we also spend lots of money securing oil facilities and keeping peace in the region.
“We have our DESOPADEC managing the derivation funds and I am convinced that they are doing their best to make life better for the oil-producing communities.
“We have been short-changed severally because we are not in control of how the funds are distributed. There is a lot of money being owed us on derivation and we are working very hard to get the Federal Government to pay us because it will help us so much in our budget to provide more for the oil producing communities.
“If every community rises up to control their resources then there will be chaos and anarchy,” he said.
The governor hinted that the state government may employ more teachers in the first quarter of 2021 to cater for newly established technical colleges being constructed across the state.
“In 2021 we will employ more teachers basically in Science and Technical Education. We will employ according to needs and not according to pressure.”
He said that his administration had completed many road projects, including the Ovwor-Effurun-Otor Bridge in Ughelli South Council Area, adding that the government had also awarded and mobilised contractors for two major storm drainage projects in Warri, Uvwie and environs.
“We have mobilised them and I hope they work well in this dry season because without tackling the drainage systems in Warri, any road constructed there will not last,’’ he stated.
On tourism, Okowa stated that his administration was constructing Asaba Leisure and Film Village along Illah Road, adding that most movie producers will be headed to Asaba once the project was completed in May, 2021.
In a vote of thanks, Chairman of Nigeria Union of Journalists (NUJ) in the state, Comrade Michael Ikeogwu, thanked the governor for the cordial relationship between the media and the government, and assured that journalists in the state would continue to perform their role as watchdogs of the society.

#ENDSARS PROTEST : We are sorry, says Osinbajo to Nigerian youths

Francis Achi - October 14, 2020
4
A Nigerian youth, Ugochukwu Eze, who is based in Abuja has narrated how officers of now dissolved Special...