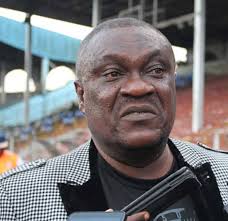 Warri Wolves have sacked Evans Ogenyi as the technical adviser of the side, after the Seasiders played a goalless draw with struggling Jigawa Golden Stars on Wednesday, March 17, 2021 in a Matchday 16 tie at home.

The club’s Chief Executive Officer, Etu Moses, who disclosed this in a media chat after the encounter, deplored the current position of the team in the league, despite the management’s huge financial motivation of the side.

Etu said the first team assistant coach, Paul Offor, will be in charge of the club on interim basis, pending the appointment of a new technical adviser.

“It’s very very unfortunate that of all the teams, we played a goalless draw with Jigawa Golden Stars,” Etu stated emphatically.

“It shows that something is wrong somewhere and action has to be taken.”

“We have relieved Evans Ogenyi of his job as the team’s technical adviser.”

“Coach Paul Offor will be in charge of the team, pending when we will appoint a new technical adviser.”

“We thank him (Ogenyi) for his time with us and wish him all the best for the future.”

“We aren’t owing anybody. We have paid salaries and other entitlements up to date.”

In the last four games under Evans Ogenyi’s watch, the Seasiders did not record a win and managed to score once.

That goal came in the rescheduled Matchday 10 game with Enyimba International at home.

The club will next be in action on Sunday, March 21, 2021 in a Matchday 17 encounter against Heartland FC at the Dan Anyiam Stadium in Owerri.

Why NLO is worth $500m in South America, Asia – Ogunnowo

Iyalode of Ojodu assures 100% victory for Buhari in Lagos

Aigbogun submits final list, team off to Niamey on Tuesday

Totori News - January 21, 2019
0
Head Coach Paul Aigbogun has submitted to the Nigeria Football Federation, his final list of 21 players that he believes will do Nigeria proud...