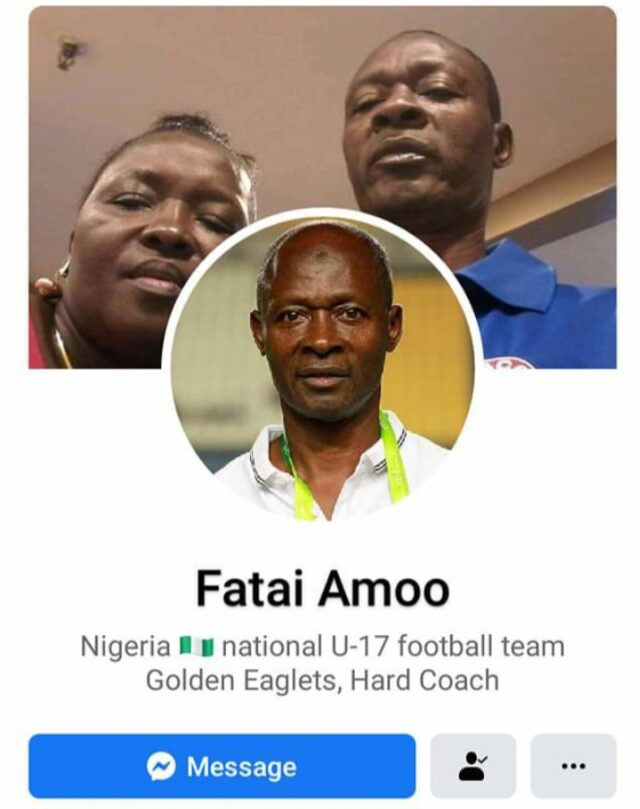 It was discovered that a fake facebook account with the name – Fatai Amoo was created and information about the invitation of players to the camp of the Golden Eaglets was posted on the clandestine facebook page.

However, some people observed that it was not the original facebook page of the chief coach of the Golden Eaglets and they were quick to inform Nigerians in their comments section, while many users of facebook already click the like button of the information passed by the scammers.

Speaking to the media, Fatai Amoo, said that he has not been active on facebook for years and it was so shocking to him when some of his friends alerted him of the strange development.

“This is very absurd and wicked for scammers to create a fake facebook account in my name, with my photos and that of my family to deceive Nigerians,” Fatai Amoo said.

“I have not been active on facebook for about five years now. I’m not on twitter or instagram. People are free to call me analogue, but that is me. Even I hardly on my data to be active on WhatsApp and I’m only active on few WhatsApp groups,” he added.

Checking through his original facebook account @Fatai F Amoo, the only visible information there were past birthday messages of the former attacking midfielder of the Super Eagles popularly called “Arsenal”.

The same ugly scenario repeated itself few years ago when fraudsters created fake facebook account of Manu Garba, former coach of the Golden Eaglets, who won the FIFA U 17 World Cup in UAE in 2013.