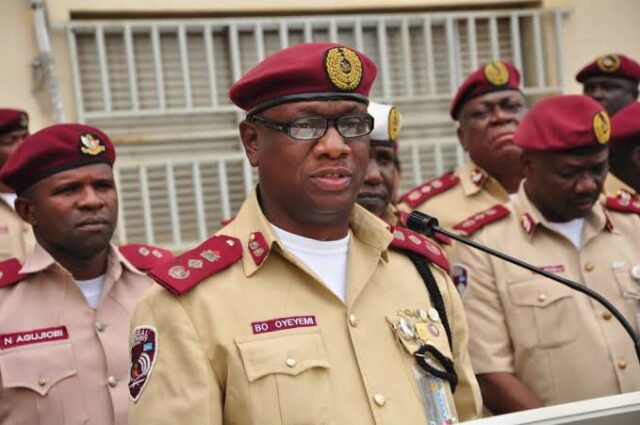 Following reports of satisfactory performances of personnel deployed for the ongoing sallah special patrol, the Corps Marshal, Federal Road Safety Corps (FRSC), Dr Boboye Oyeyemi has urged the operatives to sustain the high tempo while seeking more cooperation from the motoring public for greater performance. He also expressed satisfaction with the general conduct, commitment and professionalism exhibited by the personnel at the front line of the operations.

The remarks were contained in a statement by the Corps Public Education Officer, Bisi Kazeem who quoted the Corps Marshal saying the gallantry and excellent performances embedded so far into the exercise has impacted positively on the special operations.

Oyeyemi also noted that the successes achieved so far was only made possible through the cooperation of all categories of road users. He therefore called on all motorists to continue cooperating with the operatives of the Corps.

According to him, ” I must commend the cooperation of the road users, and state categorically that the excellent performances and positive impact recorded by the corps were directly tied to the high rate of compliance received from the motoring public”.

Kazeem also said that the commendation became necessary after receiving briefs from supervisory officers deployed from the National Headquarters to monitor the special operations nationwide.

The Corps Marshal also reviewed the entire processes and activities of the Corps, urging the staff not to relent but keep their morale high.

He expressed satisfaction with the general conduct of the staff and output across the country, while conceding that there were some setbacks in the ongoing special patrol exercise.

Oyeyemi, however, recalled that a noticeable number of the motoring public were seen violating traffic rules urging the staff to rededicate themselves for greater performance.

He, therefore, warned those involved to desist from such dangerous acts by complying with all safety precautions, as the road does not forgive.

Falcons go for the kill against Korea to avoid early exit

Totori News - January 2, 2019
0
A Nigerian Air Force (NAF) Helicopter has crashed in combat while providing close air support to troops of 145 Battalion at Damasak in Northern...