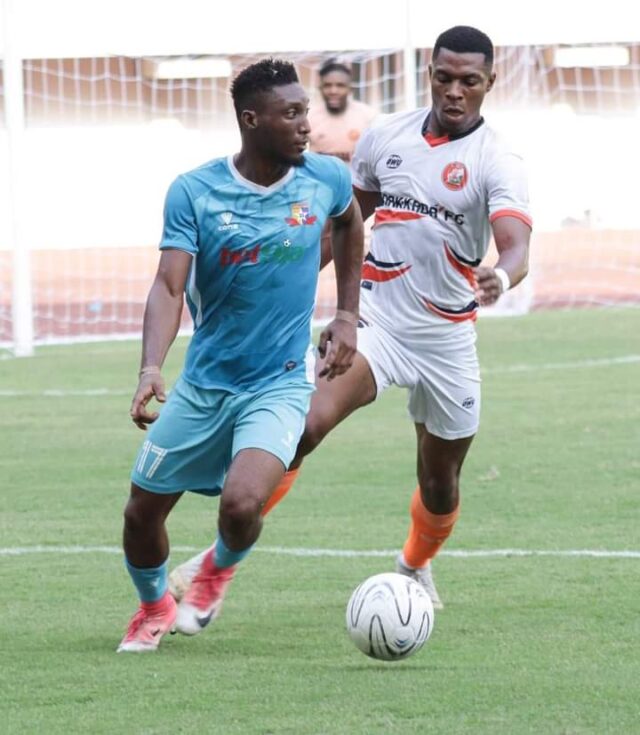 Newly promoted Remo Stars of Ikenne secured their third win of the campaign, to open a two points lead at the top of the log, while Sunshine Stars’ first victory were some of the highlights of MatchDay 5 of the Nigeria Professional Football League (NPFL) 2021/2022 season. The matchday also featured eight wins, two draws, and eighteen (18) goals in the process.

Plateau United’s visit to Ikenne for a date with Remo Stars was a veritable platform for the newcomers to make a statement of intent, and they took advantage of the opportunity. Lekan Adedayo’s header off Stanley Okorom’s corner in the 55th minute ensured that the  Gbenga Ogunbote coached side moved two points clear of Rivers United that on Saturday held Niger Tornadoes of Minna to a barren draw in Ilorin.

The stars shone brightest for Akure-based side Sunshine Stars as they secured their first win of the campaign after four attempts. Kamaru Adebari’s header in the 69th minute rattled Kano Pillars, before Michael Olalasi and Babatunde Bello sealed the game with goals in the 75th and 80th minute respectively. Pillars are just a point above the bottom with only a win in five games.

Dakkada FC in their newly adopted home turf needed some degree of resilience to see off Nasarawa United in a fierce battle at the Samuel Ogbemudia Stadium Benin City, despite finishing the fixture with nine (9) men. Aniekan Ekpe had put the home side in front on three minutes before Michael Tochukwu poked in the equalizer in the 33rd minute. Emmanuel Ayaosi wrapped the game up for the Uyo based side in stoppage time.

A brace from Madaki Dauda helped Katsina United to a 2-1 win at home to visiting Gombe United, who thought they would be departing with a point after Ibrahim Yahaya drew them level just before the break.

In Aba, Enyimba secured their first win in three games with a hard-fought lone goal victory against visiting Shooting Stars of Ibadan. Emmanuel Godwin latched onto Wasiu Mahmud’s cross in the 87th minute to find the back of the net. The win takes the eight time champions to third on the log and some respite for coach Finidi George.

Goals from Muyiwa Balogun and Oladayo Alabi in the 45th and 61st minute respectively helped MFM of Lagos to a 2-1 win against Abia Warriors at the Teslim Balogun Stadium. Godwin Obaje secured the consolation goal for the Umuahia side six minutes to regulation time.

Rangers International pulled a stunning performance in Ilorin to secure a point away at Kwara United. Samuel Chisom had put the home side in front on 31 minutes, but former Lobi Stars forward, Ossy Martins ensured both sides shared the spoils when he headed home a corner on 49 minutes.

SESC celebrates 1st lady of Totori News on her birthday