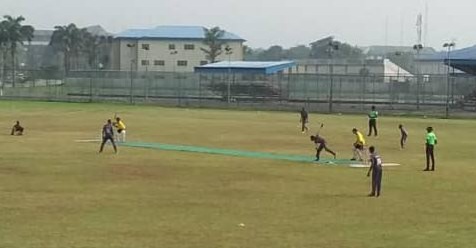 Akwa state U17 cricket team stage a major surprise against Rivers State on the first match at Uniport cricket pitch beating the home team with 39 runs in the NCF/PwC U17 Cricket Championship Boys South-south zonal eliminations on Thursday 21 January 2021.
The Akwa Ibom team came into the 30 overs game as underdogs but utilized their opportunity effectively against the more experienced and equipped Rivers state team. Coach Patrick Edidiong boys played 118 runs all out at 28.1 overs while Rivers team made 79 runs all out at 18.4 overs.
Team Akwa Ibom won toss early hours of Thursday in match day 1 of the eliminations and elected to bat first. Though having early fall of its captain’s Wicket, Elijah Sunday, “the team moved on to plan B”, as Coach Edidiong said.
“It was a very hard fought victory, the whole crowd was against us. Now we are going back to our drawing board to strategize for the next game. For today’s game everyone came to the party but Elijah Saturday, Savior Onofiok and Covenant made the day, with Elijah Saturday taking good number of wickets from Rivers during bowling innings.” Coach Edidiong explained.
The Rivers state U17 coach, Tamuno John was not available for post-match comments however, the Regional Development Manager (RDM) and Rivers State Head Coach, Tonye Timinadi had his observations of the epic game.
“It was a very tight game and the winners take it all, because the winner of this game is sure making it to the finals. Akwa Ibom started hitting the balls but when their captain was wrapped and sent off their runs dropped but suddenly they were able to keep their wickets and made 118 runs. Rivers came out in hast to make runs and lost it. Michael David, Rivers captain lost his wicket when it was needed most and I was surprised, counting on his two times experience in the U17.”
The rivers state team was tipped to win but Akwa Ibom took advantage in the way they took their single runs. As a cricket analyst noted why Akwa Ibom over run Rivers, “they were business like in the way they took their singles.”
The excited Akwa Ibom team is now set with greater confidence to play debutant Cross River State team in next match which they look confidence to win and set up spot at the zonal finals.
Delta and Edo State had the second game of the day with details and outcome expected later in the day.