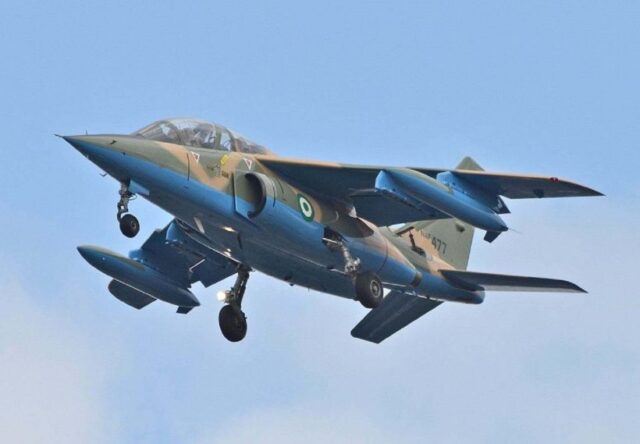 There are indications that the Nigerian Airforce fighter jet, an Alpha jet which went missing while on interdiction mission on Wednesday in Borno, may have crashed.

However, what NAF investigation, search and rescue is trying to unravel, is the location of the crash and what was responsible for the crash as well as wheteabouts of the Pilot and Co-Pilot.

Consequently, the NAF said it is not ruling out anything that could have led to the crash of the fighter jet.

Director of NAF Public Relations and Information, Air Commodore Edward Gabkwet confirmed the intelligence report in an update on the missing Alpha Jet aircraft on Friday.

Gabkwet said, “Intelligence report gathered by the Nigerian Air Force (NAF) indicates that the Alpha Jet aircraft (NAF475) that went off the radar with 2 crew members on board on 31 March 2021 might have crashed.

“The cause of the crash as well as the whereabouts of the 2 pilots remain unknown.

“At this point, the NAF is not ruling out anything regarding the incident.

“It however remains hopeful that the crew would soon be found and rescued.”

Bitcoin tumbles below US$46,000, Tesla no longer accepts Bitcoin as payment

EXCLUSIVE : I wept when my son scored goal with his head like his...

Totori News - May 5, 2021
0
Fr. Ejike Mbaka, Enugu Catholic priest said to be missing, has reportedly appeared. Tension had risen in Enugu over...