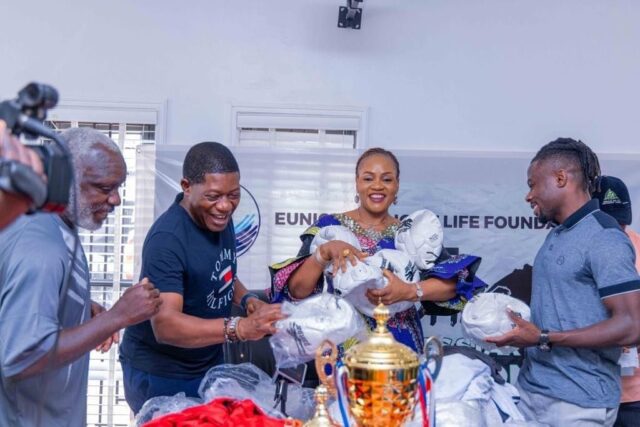 Known for not just his footballing abilities but also his large-hearted philanthropism, Moses Simon has extended his charity to his home state of Benue, as the Super Eagles winger was hosted by Dr Eunice Ortom, the First Lady of the Executive Governor of Benue State in Makurdi.

Fresh from captaining the Super Eagles to a historic win, Simon donated 3 sets of jerseys and 40 balls to the four semi finalists of the Eunice Spring Life Foundation U-18 championship and also to the Local Government he hails from.

Speaking at a welcoming ceremony, the First Lady of Benue State, Dr Eunice Ortom thanked Simon for being a worthy ambassador of the middle belt, using sports and his philanthropic acts to unite Nigerians. She stated that the Nantes man has grown into a role model for youth in the state.
Reacting, Moses Simon appreciated the First Family of the state for receiving him warmly and stated his commitment to always represent the state in good light.

Charging the youth of the state, Moses Simon added “if i can make it in football, you can make it because I was a nobody, just that boy in the street of Kaduna who was in the barrack. So you guys can make it”

“This is a specific message to the female teams. I’m really impressed you’ve chosen a noble cause to take to football. Playing football is of better advantage than to indulge in social vices of any kind”, he added.

The Nantes winger expressed gladness in finally coming back to his roots, and thanked Her Excellency, The First Lady of Benue State for making it happen, as facilitated through Simon’s friend, Media Aide to Honourable Minister of Youth and Sports Development, Kola Daniel.

PANDEF To Drag Buhari To ICJ, UN Over uneven Appointments In NNPC