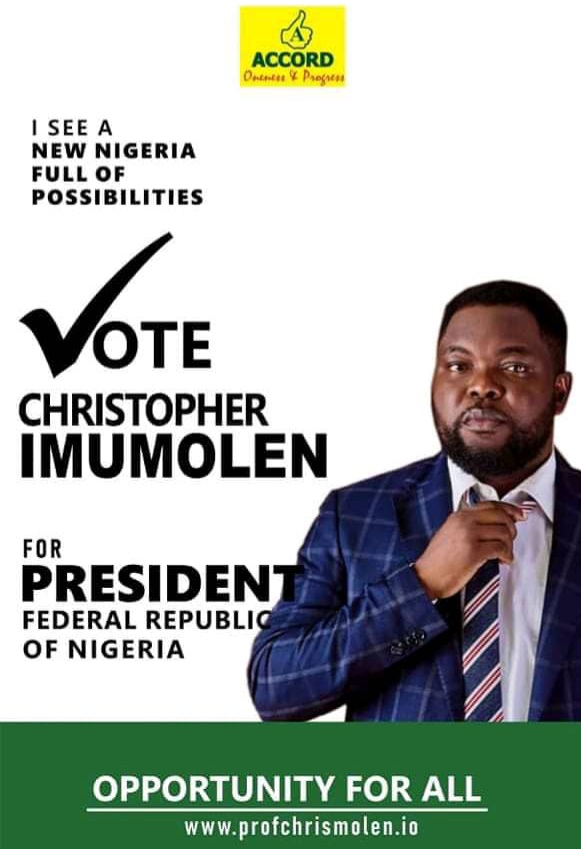 The country’s youngest presidential candidate is not happy that the media is deliberately creating the impression that only 4 out of the 18 aspirants vying for the office of Nigeria’s president should be promoted and given maximum exposure ahead the elections in February 2023.

He condemns a situation where media organisations and groups have in recent months given undue recognition to a few handpicked parties and their candidates to the detriment of the larger majority in the area of fair coverage, saying that it was a trend that portends grave danger for the growth of country’s democracy.

The academic and business man does not agree that the country’s future will be better served if the scope of choices is narrowed to just the candidates from the APC, PDP, Labour and NNPP on the grounds that they are bigger and more popular.

“From what I have observed lately, it appears that the Nigerian media has formally decided to adopt only 4 candidates out of the 18 that have applied for the job of Nigeria’s president come 2023,” Professor Imumolen said on Monday.

“I need to be proved wrong on this, but the facts on ground suggests otherwise. The media does not give as much coverage to the other 14 presidential candidates as it does APC, PDP, Labour and NNPP, be it in their reports, news, analysis or debates.”

“Now, this is wrong. It is a trend that has been going on unabated since the campaigns started. It happened during the last NBA conference, the Lagos Chamber of Commerce and Industry (LCCI) conference, and recently, at the Arewa House summit in Kaduna.”

“I’m not just crying wolf where none exists. It appears that there is a deliberate attempt to sideline other political parties while preference is given to just a few under the misguided assumption that they are the major political parties. Who made them the major parties or candidates?”

“The media cannot decide who to present to Nigerians to vote for. It is the people’s inalienable rights to do that. Their job as the fourth estate of the realm is to allow a level playing field through unbiased reporting of all the candidates and their activities as enshrined in both the constitution and the electoral law.”

“But by limiting the choices of Nigerians by focusing on only the aforementioned political parties and their candidates, they inadvertently create the notion that only those 4 parties are eligible and worthy to be voted for in 2023.”

“The danger of this is that the media would have succeeded in denying Nigerians the choice of selecting fresh set of leaders to take them to the next level in a fast changing world.”

“Let me also make this clear. No one presidential candidate is bigger than the other. So long as we have all been passed fit to contest the elections, we are all equal and should be given equal representations at platforms where we can adequately reach out to the electorate and sell our manifestos.”

“I think it’s high time we stopped this myopic mindset of just believing that those who have led us before in one capacity or the other are the only ones who can lead us again,” Prof. Imumolen said.

NFF: We have not taken decision to sack Rohr

10 things that will happen if gang up against Pinnick succeed