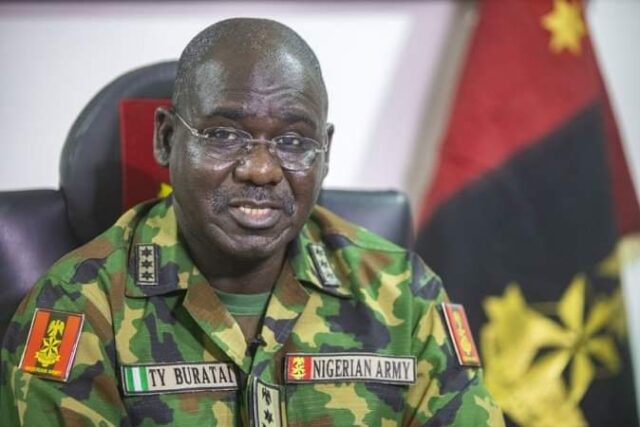 The immediate past Chief of Army Staff, Tukur Buratai, has denied fiddling with funds meant to procure arms and ammunition while in office.

Mr Buratai, a retired lieutenant general, stated this in a statement by his lawyer, Osuagwu Ugochukwu, on Friday.
The National Security Adviser (NSA), Babagana Monguno, had said in an interview with BBC Hausa Service, that funds running into billions of naira meant for the procurement of arms and ammunition under the immediate past service chiefs, were unaccounted for.

Mr Monguno has since denied the report, saying he was quoted out of context.

Mr Buratai, who was the COAS between 2015 and 2021, said no arms fund was missing under his stewardship.

He also said his name was never mentioned in the interview granted by Mr Monguno.

My attention has been drawn to an interview granted BBC by National Security Adviser (NSA) RTD Major General Babagana Monguno wherein he was alleged to have accused former service chiefs of filtering ARMS Fund away.

I can confirm that LT General Buratai and other ex-service chiefs were never mentioned in the interview and neither was any arms fund missing under the stewardship of LT Gen T.Y Buratai.

Interestingly, NSA Babagana Monguno has denied making such accusations. We therefore urge members of the public to discountenance any such misquoted narrative suggesting sleaze on the integrity of RTD LT Gen T.Y Buratai.

Anyone interested in knowing how Arms were procured by the ex-service chiefs and particularly LT Gen T.Y Buratai should channel such request for information to the Ministry of Defence and stop the habit of speculation and false information peddling. Because any attempt to further tarnish the image of the former Chief of Army staff will be resisted legally.

Anozie Henry : Doing what he enjoys doing most

Totori News - May 10, 2021
0
A  former military Head of State, Abdulsalami Abubakar, on Sunday, denied online media reports linking him to armed banditry and insurgency in Nigeria.