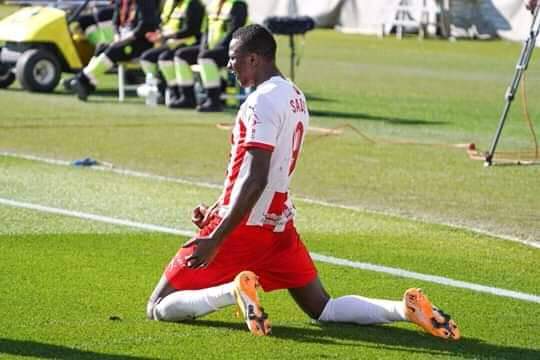 Umar made the disclosure in an interview session with some selected African journalists organised by LaLiga’s Communications Department.

According to the Almeria forward, the Spanish league stands out as compared to  Italian Seria  A, and the Scottish Premier League where the Nigerian International has played in various European League .

” To me , LaLiga is the best league in world as compared to Italian Seria A, the Scottish Premier League and the league in Czech Republic.”

” I have played for AS Roma, Rangers and Slavia Prague in Italy, Scotland and Czech Republic respectively but known of these leagues is as competitive as LaLiga”.

“In Spain,  what we  play is pure and total football and one has to be at his best week in week out.”

The 25 years also relish playing for the apex division in Spain as his team get set for their last game of the season this weekend which determines their promotion to LaLiga Santander.

“I believe we will make it to LaLiga Santander.” Playing for a  top division like the one in Spain is a dream I want fulfill.”

“We came very close last season but lost on the final day.”  I hope we learn from our mistake.”

Umar has scored 20 league goals this season in LaLiga Smart Bank and is the third highest goal scorer on the goalscorers chat.

Manu Garba: Golden Eaglets will be ready for CAN 2019

20 dangerous predictions for Sports in Nigeria in 2020