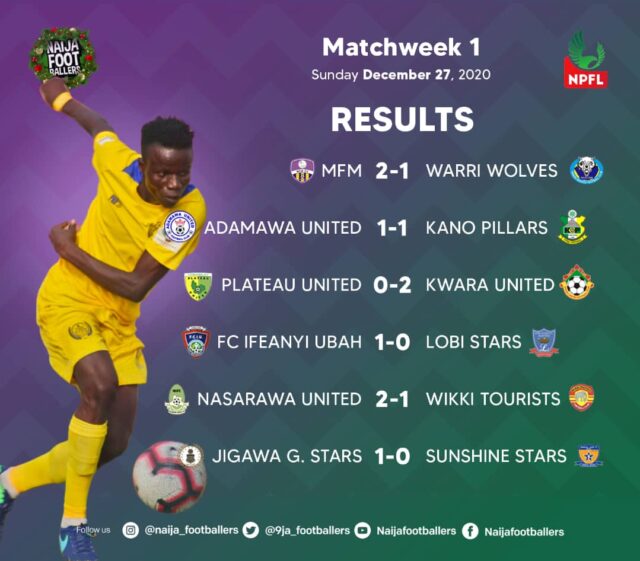 The Nigeria Professional Football League (NPFL) made its return after a seven month absence due to the Coronavirus Pandemic with six matches of the 2020-21 season played.
It was an action packed first day of the season which saw twelve goals scored and a shock result in Jos where 2017 champions, Plateau United were beaten at home 2-0 by Kwara United.
Here is our NPFL matchday 1 wrap up.
We start in Jos where Plateau United were stunned by Kwara United at the New Jos Stadium.
After a goalless first half which saw little clear cut chances, it was the visitors who scored two goals in five minutes, midway through the second half.
First it was Jide Fatokun who scored on the 62nd minute while Michael Ohanu got the second on the 67th minute to ensure that Kwara United picked up all three points.
At Nnewi, FC IfeanyiUbah started its season on a winning note after beating Lobi Stars 1-0 at the FC IfeanyiUbah stadium.
Nonso Nzediegwu scored on the 47th minute and it proved to be the winner as the Anambra Warriors held on till the end of the game.
In Lagos, MFM FC got off to a fast start against Warri Wolves as they were two goals up within the the first 25 minutes.
Ebenezer Odeyemi scored the first goal on the 7th minute while Balogun Muyiwa scored the second on the 23rd minute.
However, Warri Wolves pulled one back on the 27th minute through John Chinedu but their inability to covert their chances in the second half meant that MFM won all three points as the match ended 2-1.
In Lafia, Nasarawa United came from a goal down to beat Wikki Tourists 2-1 at the Lafia Township Stadium.
Promise Damala had given Wikki an early lead on the 4th minute but that didn’t last long as Nasarawa United equalized through an Emmanuel Ihionu own goal.
United’s winner came in the 52nd minute through Reuben Nicodemus in what was a hard-fought win.
In Gombe, a late Musa Abdullahi own goal on the 74th minute meant that Adamawa United and Kano Pillars shared the points as the match ended in a 1-1 draw.
Veteran striker Rabiu Ali had given Kano Pillars the lead in 14th minute.
There was also a late goal in Kaduna as Jigawa Golden Stars defeated Sunshine Stars 1-0.
Onukwube Emeka scored the all important goal in the 78th minute for Jigawa Stars.
#NPFL21 MATCHDAY 1
Adamawa Utd 1-1 Kano PillarsNasarawa Utd 2-1 WikkiPlateau Utd 0-2 Kwara UtdJigawa GS 1-0 Sunshine StarsFCIU 1-0 LobiMFM 2-1 Wolves
Monday 4PMKatsina United v Heartland FCAkwa United v Dakkarda FC
Tuesday 4pmEnyimba v Abia Warriors
Wednesday 4 pmRivers United v Rangers International
Harrison Iwuala
08152688500

2020 US ELECTION : VICTORY OF GOOD OVER EVIL, SAYS OBASANJO