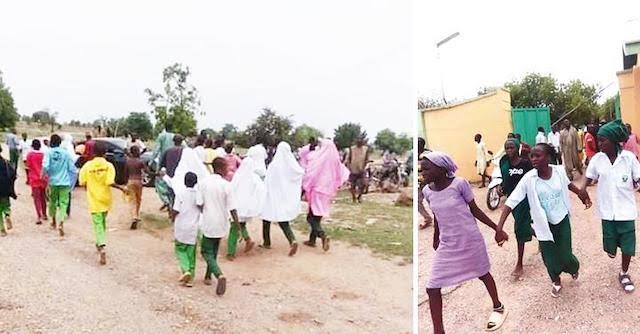 This was disclosed by Kebbi State Governor, Abubakar Atiku Bagudu during his visit to the school on Friday. He said that the bandits who abducted students in Birnin-Yauri overpowered 22 crack policemen deployed to safeguard the school.

Sadly, one of the policemen was also killed.

Bagudu further said that government got wind of the planned abduction two weeks ago and made moves to secure the Federal Government College Birnin-Yauri.

This abduction was a brazen and tragic incident where bandits confronted the policemen who were providing security to the school and overpowering them”, he said.

“Unfortunately, they made away with some students and teachers . It was an unfortunate incident .

“We consulted with the Federal authorities here who told us that the school has about two weeks to finish its terminal examinations.

“It was agreed that if security can be found and stationed in the school, it was better to support the children to finish their examinations before going home.”

Bagudu said the Commissioner of Police deployed a contingent of 22 men from the Special Anti Terrorism Taskforce.
The Kebbi Governor said: “They were around even during the attack.

Unfortunately, they were overpowered. Based on different accounts, the bad elements came in hundreds.
According to the Governor, the security agents deserve commendation for their gallant efforts while trying to repel the attack at the school.

Bagudu assured the parents of the kidnapped students that efforts were being intensified by the State Government to ensure their safe rescue.

“The state government would do everything humanly possible to bring back these children and the staff back safely.

“Since when this unfortunate incident occurred, all hands are on the deck to ensure that these our children and the staff are rescued alive, hale and hearty,” Bagudu, promised.

He said all hands must be on deck to support the security agents.

He said vigilantes and community leaders are all doing their best to see that they are rescued alive.

“These children are all ours and we are obliged to pray to seek for their safe return. I am glad that the parents who also spoke expressed courage.

“They have also acknowledged that the security agents did the best they could and they are still doing their very best, Equally, the school authorities, Principal, Teachers and other staff.”
Bagudu urged all and sundry to continue to be fair minded, pray and exchange information, adding, ” by God’s grace, our children will come back to us .”

The Principal of the College, Alhaji Yusuf described the incident as unfortunate, adding, ” it is a very sad week for all of us.”
Yusuf also disclosed that the number of the abducted students was still being ascertained.

The State House of Assembly member representing the area, Adamu Muhammad Birnin Yauri and the Chairman of Ngaski Local Government Area, Buhari Abdullahi commended the governor for the sympathy visit and his quick response to the matter.

One of the parents told the governor that his visit had given her hope and inspiration that her abducted children would be rescued.
She appealed to other parents to fervently pray for the success of the rescue operation.

The governor also visited the Emir of Yauri Dr. Zaiyanu Abdullahi to sympathise with him over the abduction of the school children.
Governor Bagudu also visited Yauri General Hospital where he sympathised with victims of the bandit attack .