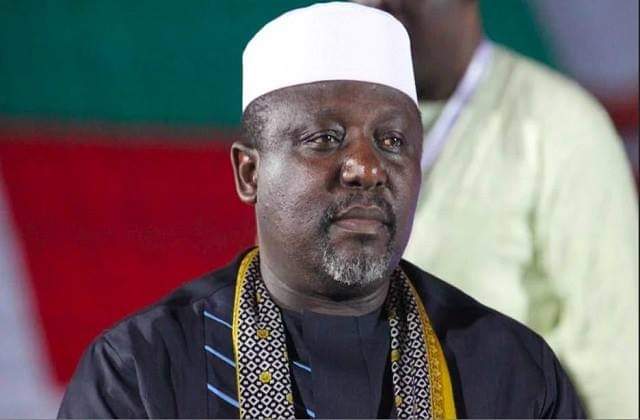 A former Governor of the South-East state of Imo, Rochas Okorocha, has been arrested by the anti-graft agency of the Federal government of Nigeria.
Mr Okorocha was arrested by operatives of the Economic and Financial Crimes Commission (EFCC) at about 4 P.M. Tuesday at his Unity House private office in Abuja, sources familiar with the matter told this medium.

The former governor was arrested after a five-hour standoff with EFCC operatives who trailed him to the location.

Our sources said the anti-graft agency had repeatedly invited the former governor to its Abuja headquarters in connection with multiple corruption allegations against him.

Mr Okorocha, who is now senator, reportedly declined to honour the invitation, a development that infuriated detectives who fanned out to get him.

The politician is currently being interrogated at the EFCC headquarters and it is unclear if he would be allowed to go home today.
Details of the allegations against the senator are sketchy but our sources said they are related to suspected monumental graft during his eight-year reign as governor.

Mr Okorocha’s spokesperson, Sam Onwuemeodo, could not be reached Tuesday evening to comment for this report.
When contacted, EFCC spokesperson, Wilson Uwujaren, confirmed the former governor is in his agency’s custody.

He declined further comments when pressed for details of the allegations against the politician.
Since he left office as governor in 2019, Mr Okorocha has been having a running battle with his successor, Governor Hope Uzodinma, who accused him of misgovernance and corruption during his tenure. Both men are members of Nigeria’s ruling party, APC.

On February 21, the former governor was arrested by the police for unsealing a hotel owned by his wife but which was shut by the Imo State government. He was later released.

In November 2020, the EFCC’s zonal office in Enugu arraigned Lasberry Anyanwu, a former commissioner who served under Mr Okorocha. He was charged with stealing and misappropriation of public funds to the tune of N180 million.

2020 US ELECTION : VICTORY OF GOOD OVER EVIL, SAYS OBASANJO

Totori News - January 28, 2021
0
The Inspector General of Police, IGP Mohammed Adamu, on Thursday handed out 39 cheques worth N160m to families of policemen killed during...