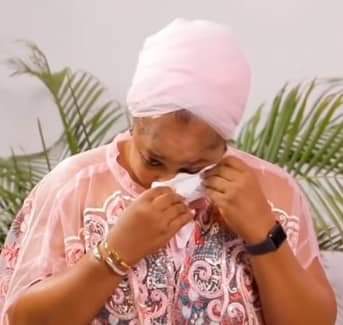 Kemi Afolabi, the Nigerian actress, has revealed that her doctor said she has five more years to live following her battle with an incurable ailment.

The film star brought the revelation to light when she featured on the latest episode of #WithChude, published on Friday.

During the interview, Afolabi said she was diagnosed with lupus — an inflammatory disease caused when the immune system attacks its own tissues.

“I have lupus. It’s not curable. You just have to take medications for the rest of your life,” she said amid tears.

The actress also said the doctor instructed her to always stay with her loved ones due to her health condition.

“Make sure you are with your loved ones. At least, you still have up to five years,” she added.

It is understood that she had lived just one year since the doctor’s pronouncement.

In January, Afolabi recounted her near-death experience in 2021 after she was diagnosed with the disease.

The movie star said she started preparing for death and even took several measures including writing her will and securing a burial space.

She also said it has been a struggle taking medications to reduce pain and ensure that it does not affect her weight — considering the entertainment industry places so much value on appearance.

“Being in an industry that places high value on appearance, it’s been a struggle taking medications that helps ease the pains but affect my weight and people will constantly remind you of how fat you’ve become without hesitations,” she had said.

Poland 2019 : Nigeria scale through to round 16, may play Senegal

Totori News - July 15, 2020
0
Twelve directors of the Economic and Financial Crimes Commission (EFCC) have been suspended.  On Tuesday, Abubakar Malami, attorney-general of...