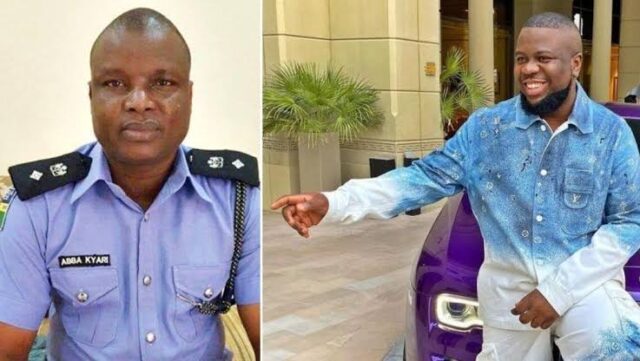 The Police Service Commission has suspended a Deputy Commissioner of Police and Head, Intelligence Response Team of the Nigeria Police Force, Abba Kyari, over his indictment by the Federal Bureau of Investigation for alleged involvement in a $1.1m internet fraud.

This came a few hours after the Inspector-General of Police, Usman Baba, recommended the “immediate suspension” of Kyari, from the Nigeria Police Force.
The police commission said Kyari’s suspension took effect on Saturday, July 31, 2021.

The statement titled, ‘FBI indictment: PSC suspends DCP Abba Kyari, directs IGP to furnish it with information on further developments’, was signed by the commission’s Head, Press, and Public Relations, Ikechukwu Ani, on Sunday.
The statement read, “The Police Service Commission has suspended Abba Kyari, a Deputy Commissioner of Police and Head, Intelligence Response Team of the Nigeria Police Force from the exercise of the Powers and functions of his office.

“Abba Kyari’s suspension took effect from Saturday, July 31st, 2021, and would subsist pending the outcome of the investigation in respect of his indictment by the Federal Bureau of Investigation of the United States.
“The Commission has also directed the Inspector General of Police to furnish it with information on further development on the matter for necessary further action.

The Commission’s decision which was conveyed in a letter with reference, PSC/POL/D/153/vol/V/138 to the Inspector General of Police today, Sunday, August 1st, 2021, was signed by Hon. Justice Clara Bata Ogunbiyi, a retired Justice of the Supreme Court and Honourable Commissioner 1 in the Commission for the Commission’s Chairman, Alhaji Musiliu Smith, a retired Inspector General of Police who is currently on leave.”
The FBI criminal complaint lodged at the United States District Court in California had listed Abass Ramon, aka Hushpuppi; and Kyari among six suspects indicted in a $1.1m international fraud conspiracy.
The other suspects include AbdulRahman Juma (Abdul); Vincent Kelly Chibuzo (Kelly); Rukayat Motunrayo Fashola (Morayo); and Bolatito Tawakalitu Agbabiaka (Bolamide).
Kyari, who is popularly known as ‘super cop,’ had been under fire since the FBI, last Wednesday, unsealed a 69-page court document showing that he had been under investigation by the Bureau for his alleged link to Hushpuppi, who had pleaded guilty to fraud.
In the case marked 2:21-cr-00203, USA VS Abba Alhaji Kyari dated April 29, 2021, the FBI asked a US District Court in California to order the arrest of Kyari for 10 days.

The IGP in an earlier statement said Kyari’s suspension was expected to create an enabling environment for the NPF Special Investigation Panel to carry out its investigations into the weighty allegations against him without interference.