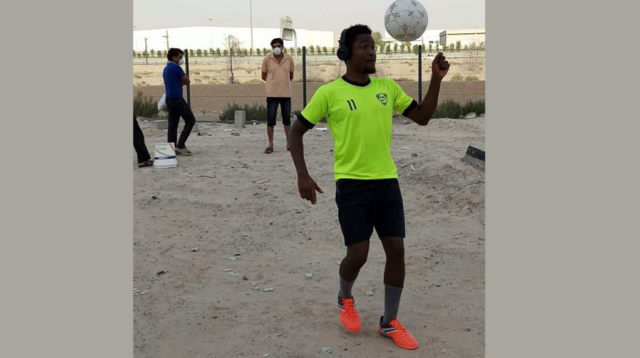 As a child, John Sunday Akwu grew up playing football on the streets of Sokoto state. He was so good that he won the most valuable player at the 2016 YSFON tournament in the state.

His football exploits was known around the Sokoto axis. He was the rave of the moment among other grassroot players and clubs in the state. It was not too long that a fake football agent got to know of his dynamic football skills.

It has been the dream of every footballer to play abroad. So when he got to hear that a football agent could take him to play abroad in Dubai,  United Arab Emirates, he was full of joy.

Unfortunately, when he got to Dubai, there was no club anywhere to sign him, rather arrangement was made for him to get a job at one of the hotels in the city where he started work immediately.

In an exclusive interview with TOTORI NEWS, the young attacking player who can operate from either side of the midfield wing play informed that it has not been easy since he arrived Dubai in early February, as he never bargained for what the type of job he would end up doing to survive in the oil rich city.

According to him, all he ever wanted to do is to play football. He never imagined that he would be working as a cleaner in Dubai hotel and to add more worries to him, the hotel work has been suspended as a result of COVID-19 pandemic.

“I was very happy when my senior man ( Abayomi Abe) informed me that a football agent could take me to Dubai to play football. I am a grassroot footballer in Sokoto and I have participated in lots of football tournaments in Sokoto,” Akwu told totorinews exclusively.

“I won the most valuable player in YSFON tournament in 2016. I was just praying and hoping to play abroad. So when senior man Abayomi told me that someone could help me, I was very happy.

“Then he linked me to one man. His name is Abdullahi Isah. He (Isah) is the person I gave N750,000 to facilitate my movement to Dubai. I later got my travelling documents ready to start my football career in Dubai.

“I was informed by Isah that another agent in Dubai will pick me up at the airport and it is the agent that would link me to a club in the country.

“But when I arrived at Dubai hotel, it was someone that told me that he is the younger brother of the agent that picked me up. I was taken to hotel and the following day, I was taken to another hotel where I started job as a cleaner.

“So I started working in the hotel but when COVID-19 became more deadly and it kept spreading, the hotel management suspended the work.

“I was training on my own to keep fit, but just few weeks ago I saw some African players training, so I have been training with them.

“I pray that my dream will be achieved. To work as a cleaner in hotel  was never my dream. I will soon be 21 years and If It is not possible to play football in this country, i don’t mind to come back to Nigeria.

“What they told me was that I was coming to Dubai to play football. I wish I can just come back to Nigeria immediately.

TOTORI NEWS switched over to Abayomi Abe, the senior man that Akwu said linked him to Abdullahi Isah to hear his own side of the story.

Abe affirmed that he was the person that informed Akwu about the possibility of playing abroad in Dubai, but he never knew that things would turn out in another dimension.

” I know Sunday Akwu very well. He is like a younger brother to me. I heard that that an agent could take him to Dubai to play football. So I contacted Abdullahi Isah, who confirmed that it was possible for Akwu to move over to Dubai. So he (Isah) contacted the agent and Sunday travelled to Dubai.” Abayomi Abe said.

TOTORI NEWS navigated again from Abe to Abdullahi Isah, who claimed to be a former player of Nasarawa United of Lafia and as a former footballer, he has links to football agents in the middle east that could help foreign footballers from Nigeria to play in United Arab Emirates.

Isah informed that he only tried to help a young Nigerian footballer to start life afresh his football career in Dubai as many Nigerian grassroot footballers have done in the past.

Unfortunately, the footballer ( Sunday Akwu) delayed his travelling. He did not travel when the window of opportunity was strong for him to get a club in Dubai.

“Yes I’m the person that helped Sunday Akwu to travel to Dubai for football. What happened was that the player could not raise the money needed for him to travel as at the time he was supposed to travel,” Abdullahi Isah affirmed.

“By the time he finally travelled, it was too late. So he was given a job to start working at hotel in Dubai to keep body and soul as he looks forward to another opportunity from some clubs.

“It was COVID-19 pandemic that caused the whole mess if not, he would have done some trials with some clubs and might have been playing football now in Dubai.

“So I don’t think he is stranded. The agent in Dubai will still help him.

Whatever be the case, it was affirmed that money exchanged hands to facilitate the movement of Akwu to Dubai. It is dubiously exploitative to pay N700,000.00 or N750,000.00 to travel to Dubai, United Arab Emirates.

So TOTORI NEWS connected back to Akwu, who insisted that he did not meet the football agent in Dubai, but he met someone who claimed to be the younger brother of the agent and he was the person that took him to the hotel in Dubai that employed him as a cleaner.

“It was N750,000.00 i paid to travel to Dubai. I was shocked that when I got to Dubai, I did not meet the football agent at the airport. I met someone that said he is the younger brother of the agent and he took me to hotel.

“The following day,  I started work as a cleaner. He did not mention football to me at all. He only said there is work that I can do at hotel and I got one as a cleaner.

“I clean toilets, the rooms, the floors, any cleaning duties at the hotel, but my dream still remain to play football and i hope to achieve this dream by grace of God,” he said.

Watch out for the Part 2 of this football scam human trafficking slavery.

EXCLUSIVE : How Ivorien club afflicted me with juju- Former Nigeria...

Francis Achi - December 1, 2020
8
If you are still doubting the existence of juju in African football, you need to relax and read the account of Akeem...