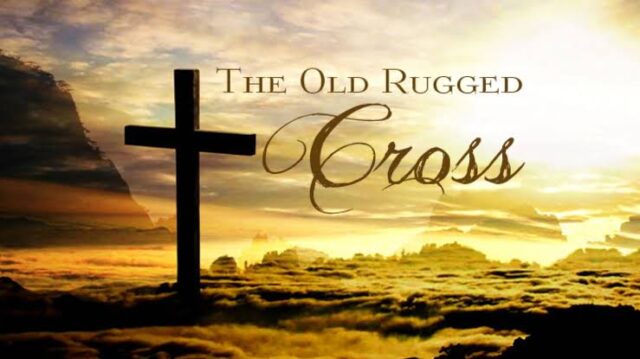 I will start with that popular chorus ‘Old rugged cross’

A sermon on the cross is not one many enjoy. It is more convenient for us to revel in that blissful, problem-free lfe. It is believed that once you are a child of God, it will be all rosy. Pains will run away; sickness will jump over the fence; strife will hide under the bed and your pocket will become Central Bank of Nigeria.

If that was the case, I wouldn’t lose my beloved mother now. It is a most excruciating moment for me. The sudden nature of her demise made it the biggest shock I had ever dealt with. But why now? Why must it happen at a time I had resolved to deploy all my intellect and expertise to the service of God? I said YES to the Almighty God. So such bad news shouldn’t be my lot. It should be good news all the way (so I reasoned).

While I pondered over all these, I started getting some revelations these past two weeks. Every morning, I will wake up to the ‘Old rugged cross’ hymn belting out of my neighbour’s apartment. (It must be noted that since the message sank in from the Most High, he hasn’t played that song again. In fact, this is a fellow who plays more of hip hop than christian songs. It was a mystery that he chose to play that hymn consistently every morning at the time).

So the Almighty started interacting with me along the line of the ‘cross’. He got me to download that hymn and listen to it as many times as possible. Then I got gradually drawn to the verses.

Before then, in my daily Bible study, He led me to I Corinthians 9: 24-27. Here we are enjoined to run a good race here on earth and target that IMPERISHABLE CROWN. We shouldn’t run the race like the Olympians that win medals that could be stolen or perish along the line. But our reward for this race is a crown that cannot perish. The message of an imperishable crown sank in more as I took more cognizance of the verses of the ‘Old rugged cross’

In taking me through the way of that OLD RUGGED CROSS, the Almighty made me take away the following…

(1) In Mathew 26: 39, the pains of the cross are well captured when Jesus said; “O my Father, if it is possible, let this cup pass from Me; nevertheless, not as I will but as You will”. If Jesus Christ Himself who raised the dead and healed many of infirmities could be so scared of a looming suffering on the cross, even as He had the ability to immune Himself against pains, then who are we?

If He who takes away the pains of the world felt the pains Himself even before getting to Golgotha, then the pains should even be more excruciating for us. So let no one be deceived; if you want to serve God in truth and in spirit, be prepared to go this way. And if the pains get more intense, remember that your Maker passed through it long before you.

(2) In Mathew 26: 39 mentioned above, Jesus added; “not as I will, but as You will”. This was the key message the Holy Spirit passed unto me during this our heart-to-heart chat over the very painful incident I encountered this period (my beloved mother dying suddenly the way she did). I was made to realise that it was God’s will and not my will that should be done. I remembered that while she was rushed to the hospital, I went into a fervent prayer session and heard a voice “whatever happens, be calm. I am in control”. Five minutes later, I got a call that she had breathed her last.

Since then, I and my family have been through excruciating agony but during the process of teaching me about the tenets of the cross, the Almighty let me know that this whole very painful process is meant to make me an even stronger and MORE SOLID christian. It is designed to make me better equipped for a serious task ahead which I should accomplish to the glory of the Most High.

Then He asked; “Did you want it done your way or My way?”. I replied “Your way, my Lord”. He added; “My ways are not your ways. My reasoning is different from yours”. So as painful as that incident could be as a christian, if you key into this way of the cross, you should take a cue from Jesus and say “Let God’s will be done”. And if you want to know His will for you, read Jeremiah 29: 11. His thoughts towards you are good and glorious.

(3) Talking about Jeremiah 29: 11, those good thoughts and plans God has for you could be masked in the current cross you are carrying. You believe that because those plans are good, misfortunes shouldn’t come near you’. But remember, it is His will not your will; His way not yours. According to Ecclesiastes 7:8 “The end of a thing is better than its beginning” and in Isaiah 46: 9-10, we are made to know that “God declares the end from the beginning”. If you are well aware of the fact that He knows how your present travails will end, you should be calm. You have to carry that cross SMILING THROUGH THE PAINS.

(4) Note: Only those who graciously bear this cross will inherit that IMPERISHABLE CROWN. It is not easy to smile through pains; to see God’s hand in a rather unsavoury situation; to, from a long distance, see light at the end of a very dark tunnel. SO YOU MUST BE FERVENT IN PRAYER. In Mathew 26: 44, Jesus returned from his prayer session to meet the disciples sleeping. He embarked on that serious prayer session to arm himself for the journey to Golgotha. On the contrary, the disciples slept off instead of continuously praying. If Peter had been steadfast in prayer, may be, he wouldn’t have denied Jesus as he did in Mathew 26: 69-75. Journey of the cross is tough, but a stronger prayer life makes it much easier; it becomes fun.

(5) Invite the Holy Spirit to accompany you on this journey. The Holy Spirit is a great companion. Read Romans 8: 5-11 (you need the Holy Spirit to truly understand what the cross stands for and soldier on all the way). According to Romans 8: 26 “The Spirit also helps in our weaknesses. For we do not know what we should pray for as we ought but the Spirit Himself makes intercession for us with groanings which cannot be uttered”.

So in that state of WEAKNESS (the cross makes you vulnerable), you are STRENGTHENED by the Holy Spirit. The journey of the cross is much tougher without the Holy Spirit beside you to guide and encourage you. It was the Holy Spirit that interpreted this whole process (I’m passing through) in the first place. I called my wife and we analysed it and with each passing day, the picture gets clearer. And I wake up every morning giving all glory to the Almighty God.

(6) Mathew 6: 19-21 reads: “Do not lay up for yourselves treasures on earth, where moth and rust destroy and where thieves break in and steal, but lay up for yourselves treasures in heaven, where neither moth nor rust destroys and where thieves do not break in and steal. For where your treasure is, there your heart will also be”. It is easier to deal with the demands of the cross if you set heavenly standards. If you set your sights on the kingdom of God and how to be a candidate for that place, you will understand that the difficulties of today may make you unworthy of this earthly crown (you are a subject of ridicule, by the way, to the undiscerning) but praising God through the tough times, enhances your eligibility for His kingdom where that IMPERISHABLE CROWN awaits you.

(7) NO CROSS, NO CROWN…According to Verse 2 of this song ‘Old rugged cross’, it is despised by the world but has a huge attraction to the believer. Jesus Christ is seated in God’s Kingdom in splendour after bearing that cross. That is what awaits all of us who gleefully bear this cross here on earth. The consolation is in Verse 3, where we are assured that where Christ who bore that old rugged cross is, there we will also be, adorned with that kingly crown.

*My prayer for you today is that the CROSS doesn’t bring CRISIS to your life. May the Almighty God give you the grace to bear it to the very end where the CROWN awaits you.

Divine Manifestation of The Ancient of Days Set For December 26

Kaduna state is for PDP head to toe – Hon. Gaiya

20 dangerous predictions for Sports in Nigeria in 2020

Fighting The Giant Of Side Chick and Side Cock