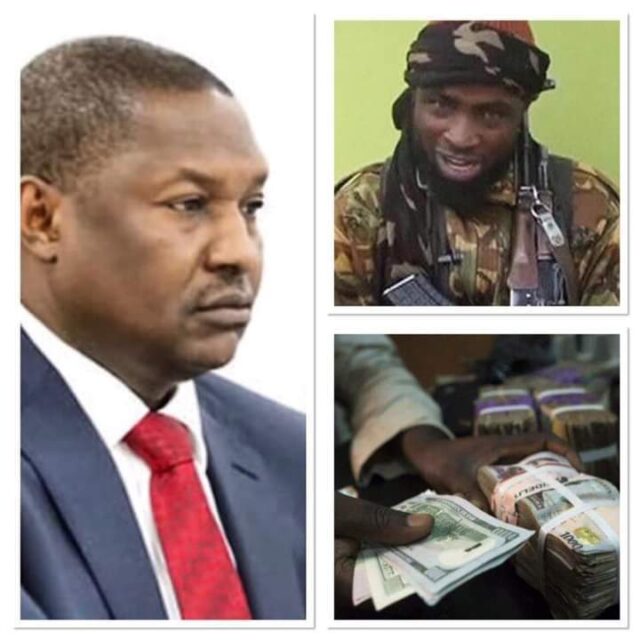 The Attorney-General of the Federation, Abubakar Malami (SAN), on Friday, said the Federal Government was set to prosecute some high-profile Nigerians and businessmen for financing terrorism.

He however did not disclose the identities of the suspects or the number of people affected.

Malami disclosed this in an interview with State House correspondents at the Presidential Villa, Abuja.
The minister said the profiling of the suspects started with the recent convictions of some Nigerians on terrorism financing in the United Arab Emirates.

He said an investigation had revealed that the suspects being profiled were culpable and there was the need for them to be prosecuted.

He said, “Sometimes back, there were certain convictions of Nigerians allegedly involved in terrorism financing in the United Arab Emirates.

“That gave rise to a wider and far-reaching investigation in Nigeria and I am happy to report that arising from the wider coverage investigation that has been conducted in Nigeria, a number of people, both institutional and otherwise, were found to be culpable.

“I mean reasonable grounds for suspicion of terrorism financing have been established, or perhaps have been proven to be in existence in respect of the transactions of certain high-profile individuals and businessmen across the country.

“I am happy to report that investigation has been ongoing for long and it has reached an advanced stage.

“Arising from the investigation, there exists, certainly, reasonable grounds for suspicion that a lot of Nigerians, high-profile, institutional, and otherwise, are involved in terrorism financing and they are being profiled for prosecution.

On the number of the suspects to be prosecuted, the minister said since an investigation was still ongoing, he would not be able to disclose that.
He however said those involved were in large number.

He said, “As to the number, an investigation is ongoing and it has to be conclusive before one can arrive at a certain number, but one thing I can tell you is it is a large number and they are being profiled for prosecution.

It is indeed a large number and I am not in a position to give you the precise number as of now because the profiling and investigation are ongoing.”

Malami said the Federal Government would not spare anybody found to be culpable.

“The message is clear: nobody is going to be spared, no stone will be left unturned. We shall certainly and aggressively pursue those people that are involved in terrorist financing as far as the Nigerian state is concerned,” he declared.

Willful Delusion and the Contention for the Truth

Totori News - May 13, 2021
0
Information and communications technology and security experts have said that the deployment of 5G technology will not necessarily resolve national problems, especially...