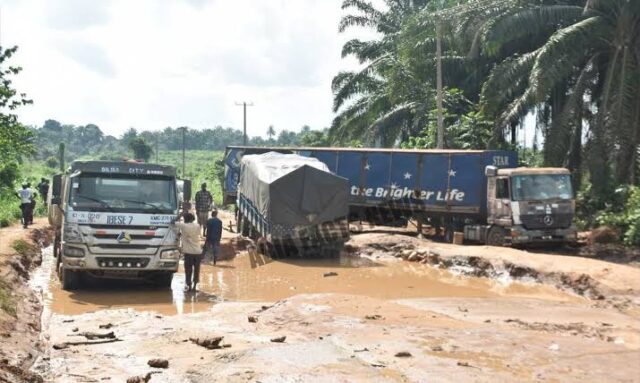 Abia State Governor Dr. Okezie Ikpeazu has called on the federal government to urgently intervene in repairing the major roads between his state and Akwa Ibom, saying their current conditions are hostile to the economic growth of the two states.

He sued for complementary interventions by the federal government to enhance easy transportation among sister states especially in the southern part of the country for purpose of trade and off-taking of products from cottage industries.

“All that our people ask from the federal government, is to be able to move from one location to another so that products from the many factories you are building will find their way to the people in the cities”, Governor Ikpeazu remarked.

Aba Ikot Ekpene road has been in deplorable state for more than 20 years, however in April 2019 “FEC has given approval for the augmentation of the contract for construction of Ikot-Ekpene-Aba-Owerri Road, Section 1, Phase 1 and the length is 11.26km.

“The contract was awarded in 2012 to Arab Contractors at the cost of N3.78bn; it came up for augmentation because the contractor actually observed some failures in the contract around some sections of the road.

“Actually, it is one lane, but with the augmentation now, it will be dualized; the contract period is 12 months and the cost after augmentation is now N6.17 billion,’’ Suleiman Zarma, the Minister of State for Power, Works and Housing said.

Leading a delegation of government and PDP officials from his state to Uyo on a condolence visit, the Abia state Governor, decried the difficulty he encountered in moving from the neighboring Abia to Akwa Ibom State by road.

Gov. Ikpeazu who is the second PDP governor to pay condolence visit beside Gov. Wike, lauded Governor Udom Emmanuel’s giant strides in the areas of industrialization and job creation in Akwa Ibom State, describing the feat as sustainable trans-generational development.

“I wish to also commend you for your great strides especially in the areas of job creation and industrialization. It is my prayer and desire that our people will begin to see gradually, some of the trans-generational projects you have embarked upon.

“Unfortunately for us in this country, we are very short-sighted and tend to celebrate palliative measures rather than sustainable development, but as a child of God I will encourage you to continue to stick to your agenda”, Ikpeazu said.

Governor Ikpeazu who expressed sympathy over the demise of the Akwa Ibom state Chairman of the People’s Democratic Party, PDP, Obong Udo Ekpenyong and the former Governor of the state, Air Commodore Idongesit Nkanga Rtd., saying his people are deeply grieved by these deaths at a time when the state is in dire need of their invaluable contributions.

“It is with heavy heart that I bring this message of condolence from the people of Abia State on the occasion of the demise of your great people.

“As children of God ours is to love those that God has blessed us with in this life and stay together, but it is God’s probity in time to harvest his own. He owns every person and he knows about everything”, he stated.

Governor Emmanuel appreciated Governor Ikpeazu for the visit and words of condolences from Abia State PDP family. He pointed out that the recent sad occurrences have thrown Akwa Ibom people into intense grief, affirming that death, to man, has remained an inevitable destiny and mystery yet to be unraveled.

“Everyone that is born is bound to die. We really cannot question God. We just hope that God will help us and God does not lack a substitute in life. When he removes, he replaces, so our prayer is that those that he has removed, he will replace them with another that will be a 100 fold. This is also a lesson to us, that as we are alive, nothing is worth losing our soul for; death is an event nobody can control”, Governor Emmanuel added.

Francis Achi - May 10, 2021
0
Cross River state government is set to deploy digital medical drones to hard to reach areas of the state.