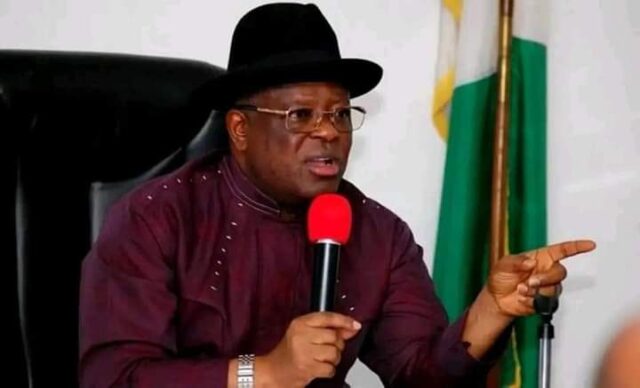 When Lord Aton, the British historian, stated that power corrupts and absolute power corrupts absolutely he had some leaders like Governor Dave Umahi in mind. The governor of Ebonyi State reminds one a lot about the Lord of the Manor, the English lord who enjoyed manorial rights (the rights to establish and occupy a residence, known as the manor house and demesne) as well as seigniory, the right to grant or draw benefit from the remainder.

That is how Governor Umahi perceives himself as Governor of Ebonyi and chairman of the South-East Governors Forum. His sense of entitlement is absolute as can be found with an emperor or an absolute monarch. The South-East is beneath his feet and at his beck and call. This explains why he feels personally betrayed at the APC Presidential primary and its appalling outcome for Ndigbo of which he is one of the chief architects.

In case you missed it, Ebonyi State Governor and APC presidential aspirant, David Umahi, lamented what he described as sabotage and betrayal of the 2023 South-East presidency project by delegates and some leaders of the zone, including the President General of Ohanaeze Ndigbo, Professor George Obiozor. Umahi said in the media days ago: “I am ashamed of the President of Ohanaeze Ndigbo. He can no longer be my president. It is a very big shame every Igbo man should be weeping for himself.” But the question is: has Umahi been pro-Igbo or allowed Professor George Obiozo to be his President? In what ways has he supported Ohanaeze since he became governor? When did Ebonyi state under him as governor remit any money to Ohanaeze?

Confused and immature leaders suffer from three psychological disorders and Umahi is manifestly an example. One of such ailments is misplaced aggression. This roaming, unfocused aspect of anger is sometimes referred to as displaced aggression, which psychologists define as retaliatory aggression that is misdirected from an initial source of provocation and turned instead upon an innocent other. Otherwise, how can one explain Umahi’s labour in dragging George Obiozor into the APC presidential primary, an endeavour that lays far-flung from Obiozor’s office and mandate?

Yes, if Dave Umahi had permitted it, Ohanaeze could have played some role in articulating what could be called South-East or Igbo strategic interest. Though one is not a spokesman of Ohanaeze, one is aware that delegates at party primaries are persons handpicked by the governors, and South-East governors have never allowed Ohanaeze to play any role in such a process. The delegates to the both PDP and APC Presidential primaries were generated much the same way, a process that offers even party members no opportunity to decide who becomes a delegate, let alone Ohanaeze. Yet, despite operating from the fringes, Ohanaeze in close collaboration with the leaders of the Southern and Middle Belt Forum rallied by the same George Obiozor did its utmost best for the South-East for Nigerian President Project. So, does Dave Umahi have to go guttural and like a drowning man, catch at anything just to remain afloat?

Dave Umahi knows that other South-East delegates emerged much the same that Ebonyi delegates emerged, and should know that talking to handpicked delegates at the Convention or anywhere was a waste of time. He should rather be talking to the powers who handpicked them of which he is a supreme leader. He was full of praise for Ebonyi delegates for standing by him but he knows that those men and women were already de-balled and couldn’t have done otherwise with all the threats drenched in piper syndrome.

One also wonders why he did not blame his fellow APC governor in the South-East, Hope Uzodinma, who got his Imo delegates to vote for a northern candidate. Out of 100 APC delegates from the state, the presidential aspirants from Imo, namely Emeka Nwajiuba secured only a single vote while Rochas Okorocha a former governor of Imo state scored zero votes. Unlike Umahi, both Emeka Nwajiuba and Rochas could not accuse Imo delegates, knowing that the ‘game’ (to use their word). Of course, they know the delegates had no power or will of their own and that Hope Uzodinma would never have the delegates he put together to vote for Rochas, his mortal enemy. That would have been over his dead body. So, what exactly is Umahi saying?

Umahi does not need to be reminded that his solo runs robbed the South-East of the presidential ticket of the two major political parties. First, he left the PDP for APC without any consultations or assurances. He presumed that the entire South-East was bound to herd on to wherever he goes while making no efforts to organise the South-East political elites to work together.

Beyond doubt, the role played by Umahi had a telling effect on the push for the two political parties to respect zoning and the prevailing national sentiment that power should be South by 2023. Like every other need for the South-East collective kicked down by Dave, the drive for the Nigerian president of South-East extraction could not be orchestrated to present a coherent force mainly because of Umahi’s poor leadership; he did not see how the collective push would favour him as an individual. Umahi and other Southern governors could not present a coherent argument and unified positions. Umahi did not attend one or two of the meetings called by Southern Nigerian governors to harmonise their position on such a critical matter.

Another psychological disorder such leaders suffer is called Egolalia, the tendency to speak almost exclusively about oneself. To Dave Umahi, it is always ‘me’, ‘I’ and ‘myself’. On live TV he claimed he was a billionaire at 25. He further hinted to the viewing public how in 2019 he privy to the award of 32 % of the president during the presidential election. Only God knows the billions on branded bags of Ebonyi rice in support of the president and billions of Ebonyi state public funds he wasted on his ill-fated presidential/vice-presidential ambition. Ndigbo are republicans and do not have anything to do with characters who cannot submit to the common good. Ndigbo are always clear about this: they do not follow imperial majesties or those who wish to create one. The leadership style that succeeds among Ndigbo are servant leadership and transformational leadership and Dave does not fit the bill.

Dave Umahi achieved quite a bit in the infrastructural development of Ebonyi state. But that’s the job even the commissioner of works can handle well. The hard part of leadership is bringing sides together. Ebonyi state much like Nigeria under Buhari is, by far, more divided than at any time in history.

Insecurity in the South-East grew exponentially to this intractable proportions under the Ebonyi governor as the chairman of the South-East Governors Forum, to the point that Anambra state prided as the safest place in Nigeria up till May last year, became the home of Unknown Gunmen(UGM). The outgone governor of Anambra State, Willie Obiano, once told the world that those perpetrating insecurity – killing, maiming and kidnapping – in Anambra state hailed from a particular state and everybody knew where he was pointing to.

Umahi’s leadership failure is best illustrated in how he handled security in Ebony state and in the South-East as a whole, which indeed is a disaster. For example, there was an understanding with the South-West governors that the South-East would follow immediately with Ebube-Agu regional security outfit, once the South-West established Amotekun as a regional security outfit. To date, there is no Ebube-Agu in the South-East except the amorphous group he coupled in the state to hound political opponents. The Ebube-Agu implementation committee was set up by the South-East Governors Forum in conjunction with Ohanaeze Ndigbo led by the same Obiozo he now vilifies. The committee had Abel Obi Umahi, Dave Umahi’s younger brother, a retired major general in the Nigerian army as chairman.

General Abel Umahi had to resign, stating that after months of waiting, nothing was provided for the takeoff of the outfit, not even an office space. So, it was obvious that Dave Umahi had led the South-East governors to play politics with the lives of Ndigbo, and many have avoidably perished, millions of naira lost to kidnapping while the so-called UGN are allowed free rein and to establish physical camps in forests of the South-East.

As said, Umahi, who secured 38 votes out of the 39 delegates’ votes from Ebonyi, blamed the outcome of the convention on South-East delegates, whom he accused of selling their votes for money. What is perplexing is his berating of the apex Igbo socio-political organization, Ohanaeze Ndigbo, over the voting at the All Progressives Congress, APC.

Megalomania is a major psychological disorder when it comes into the leadership mix and it has blighted the leadership perception of Dave Umahi greatly. Its derivative is grandiose delusions (GD), as a subtype of delusional disorder also manifesting as a narcissistic personality disorder, and characterised by fantastical beliefs that one is famous, omnipotent, or all-powerful. That is the type of governors the South-East is saddled with today.

Governor Umahi should nurse his self-inflicted injury alone and leave Professor George Obiozo and Ohanaeze out of it. He should also know that Ndigbo are praying and counting the days for this set of governors led by him to be phased out and a new political leadership enthroned for the South-East.

Ndigbo have never had it this bad or been this vulnerable and miserable all through history, no thanks to Governor Dave Umahi whose leadership of the zone has been so toxic for leaving the place worse than he met it.

Cameroon has got lots of chances to win 2021 AFCON – Bassogog

DELTA STATE GOVERNMENT HAVE EMPOWERED OVER 5,607 WIDOWS ACROSS THE STATE...