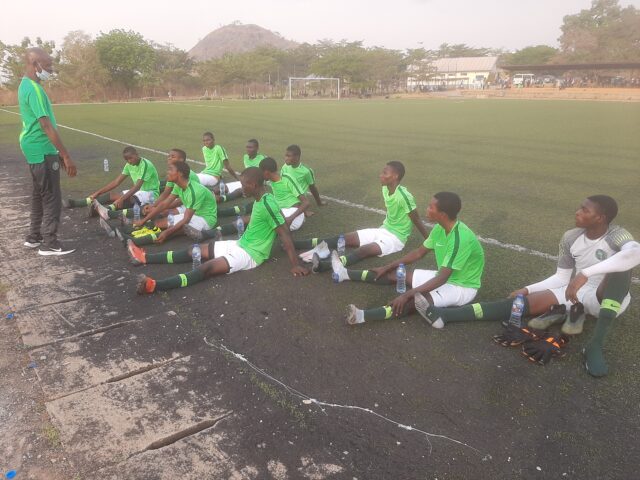 It was a very thrilling game of an end to end attacking football from both sides played at the FIFA goal project, MKO stadium, Abuja on Tuesday evening.

Golden Eaglets could not really find their rhythm in the first half and the visitors, who paraded bigger players were dominant and looked more dangerous to hurt the five- time world champions.

Sadly, there was an apprehension at the beginning of the game when a central defender of Giant Brillars Fc appeared to have fractured his ankle, but it was later discovered that it was a dislocation.

However, on resumption in the second half, the energetic Eaglets took complete control of the game, dictating the pace, while Giant Brillars only resorted to occasional counter attacks which failed to rattle the defence of the Eaglets.

Another friendly game beckons for the Eaglets on Wednesday at the FIFA goal project, MKO stadium, Abuja.

The team is preparing for WAFU B U 17 regional tournament that begins on January 5 in Togo. Nigeria will file out against the baby Elephants of Ivory Coast the following day.

Totori News - February 23, 2021
0
The deadline for registration ahead of the new season remains February 26, 2021, says Mohammed Alkali, chairman of the third tier league...