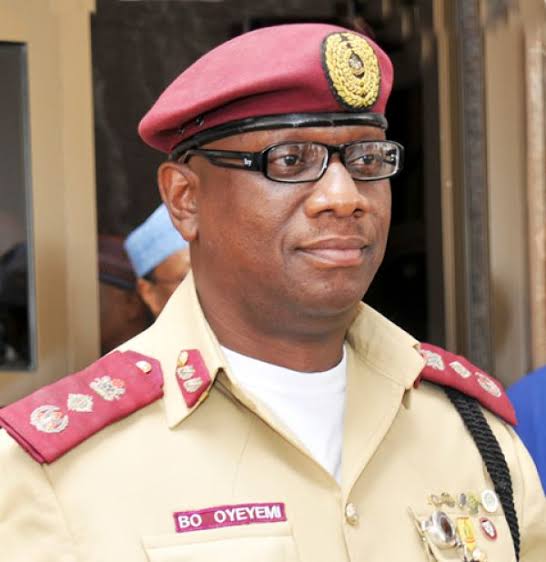 Having earlier ordered the suspension of all enforcement activities of the Federal Road Safety Corps as a result of the upsurge of the #EndSARS protests across the country, the Corps Marshal, Federal Road Safety Corps, Dr Boboye Oyeyemi has ordered the immediate resumption of all operational activities in FRSC formations across the country, as he mourns the victims of the unfortunate fatal crash that occurred in Enugu State

In a statement by Bisi Kazeem, the Corps Public Education Officer, the Corps Marshal gave the order in a memo to Commanding Officers following the urgent need to keep the roads safe, enforce maximum compliance to road traffic regulations and safety guides, as well as, to forestall incidences of crashes and fatalities on the highways.

He revealed that the crash which occurred at Nkwo/Mmaku junction, along old Enugu/Okigwe road at about 4pm on Wednesday 28 October, 2020, involved a Mercedes Benz Bus (ENU 811 KU) conveying school children and a Flatbed Mark Truck (KPP 247 XA). The crash was caused by mechanical deficiency (brake failure)

Speaking further, the Corps Marshal stressed that the Corps is saddened by this ugly development and is ready to put all within its operational might to ensure that such fatalities are averted on our roads. And one of the key strategy towards achieving this is the full deployment of personnel and increased visibility of patrol teams on the highways.

According to him, irrespective of the incessant attacks that led to the burning, looting, arson and damaging of FRSC properties in various locations occasioned by the #EndSars protest, the Corps is still deeply committed to the full realisation of its corporate mandate; as such, will not be dissuaded from carrying out its humanitarian work of keeping the roads safe, even amidst the risks on lives and properties of personnel.

While boosting the morale of the entire workforce, Oyeyemi assured the personnel that everything humanly possible must be done to safeguard the lives and properties and those of family members of Staff as well as all FRSC facilities through close liaison with security agencies.

The limb pain is growing by the day -Buba who trekked for Buhari in...

Super Eagles trounce Crocodiles to round off AFCON race in style

Benue governor’s attackers must be unravelled

Totori News - March 31, 2021
0
Treasonable assassination attempt on Governor Samuel Ortom of Benue State is an insurrection against the state and deserving the full weight of...