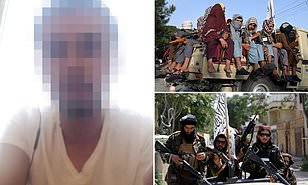 A gay man trapped in Kabul has said the Taliban ‘are hunting us’ as he gave a harrowing description of what a life under the extremists’ rule would look like for the LGBTQ+ community.

The man, whose identity has been concealed for his own safety, said the Taliban would take pleasure in hunting down and killing LGBTQ+ people in an exclusive interview with MailOnline.

‘They kill us very brutally. Not like the others who they kill with a gun or a bullet.
‘They will use fire, or they will behead or stone us, and they will enjoy it – it’s acceptable to them.’

He went on to say his best friend committed suicide because ‘no one was here to listen to his voice’.

‘I tried to encourage him, to give him hope, but he’s not coming back and I can’t forget that moment.
‘He was living like a shadow, and he went like a shadow.’

The future for the LGBTQ+ community in Afghanistan became particularly bleak when the Taliban rose to power just weeks ago.

Afghan laws already prohibited homosexuality, as people who engaged in same-sex sexual behaviour received prison terms and were widely persecuted.
But under the Taliban’s extremist interpretation of Sharia Law, homosexuality is strictly prohibited and punishable by death – often in particularly brutal ways.
In an interview with Fox News earlier this week, US Special Forces sniper Tim Kennedy, who served in both Afghanistan and Iraq, said he had personally seen Taliban fighters burning homosexuals alive and throwing them off of roofs.
Nancy Kelley, chief executive of LGBT rights charity Stonewall said: ‘For years LGBTQ+ Afghans have had to endure routine discrimination, abuse and persecution, including by the state.

‘With the Taliban in power we expect this situation to deteriorate further,’ she told i News.

Pinnick: Winning AFCON is major focus for this year

Totori News - November 2, 2021
0
Nigeria Centre for Disease Control Director-General Dr Ifedayo Adetifa has warned the country of cholera, which he claimed has caused...