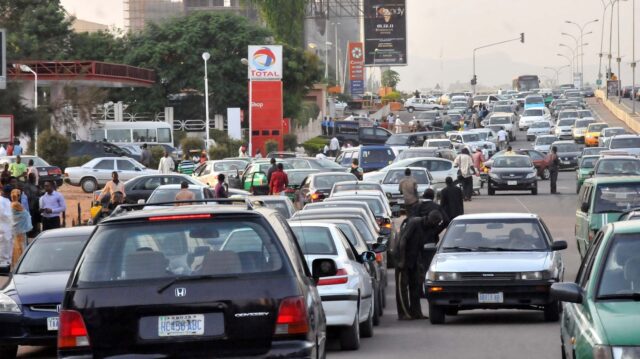 If everything works out fine, the fuel scarcity in Nigeria may be over by the weekend, www.totorinews.com reports.

Nigeria’s state-run oil company said it had started a 24-hour distribution of petrol to service stations to end a week-long scarcity that has caused traffic snarls in major cities.

The fuel shortage which started last week in the commercial city of Lagos and administrative capital Abuja has caused long queues with few petrol stations selling the product.

Transport fares have gone up in several cities, curtailing services and forcing some residents and workers to walk long distances to their destinations.

Most homes in Nigeria also rely on petrol and diesel to power their generators as the public power supply is unreliable and prone to blackouts.

The state-run Nigerian National Petroleum Corporation (NNPC) blamed the situation on importation of adulterated petrol by four oil marketers into the country.

The company said in a statement late Tuesday that measures, including around-the-clock distribution to service stations, had begun.

“In order to accelerate distribution across the country, we have commenced 24-hour operations at our depots and retail outlets.”

The NNPC has also directed oil marketers, depot owners and service stations to begin 24 hours loading and dispensing activities in some of their designated outlets.

The NNPC said it had enough stock to end the shortage, while more supplies were expected by the end of February.

“As of today, NNPC has over one billion litres of certified PMS (petrol) stock that is safe for use in vehicles and machineries,” the company said.

“As part of NNPC’s strategic restocking, over 2.3 billion litres of PMS (petrol) is scheduled for delivery between now and end of February 2022 which will restore sufficiency level above the national target of 30 days.”

It said a monitoring team, comprising security agents, to ensure smooth distribution of fuel nationwide had been set up.

The company appealed to Nigerians to avoid panic buying, adding that its measures would restore normalcy in a few days.

Soldiers to undergo counselling after outburst against Nigeria Army leadership

Aisha Buhari Cup: It is 30 Days to Kick-off!

Totori News - April 1, 2021
0
The Independent National Electoral Commission (INEC) has said it will begin a nationwide Continuous Voter Registration on June 28 across the 774...
AllEscort