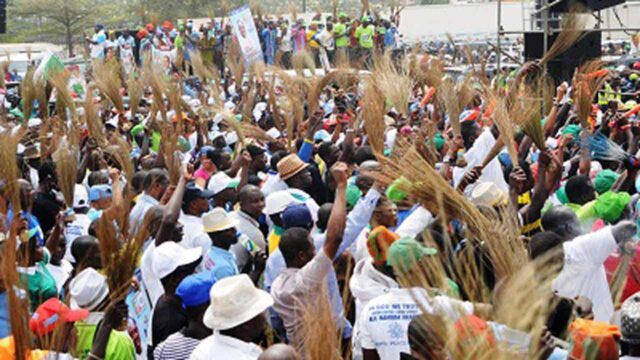 it was a free for all blows at the APC mega rally in Kano on Saturday, reports www.totorinews.com.

Violence was experienced during a mega rally by the Kano State chapter of the All Progressives Congress (APC) on Saturday, June 12.

This is as some supporters of some politicians at the rally didn’t see eye to eye on some issues and decided to settle it with physical exchange of blows.

The rally was organized to welcome former governorship candidate of the Green Party of Nigeria (GPN), A. A. Zaura, and others who recently decamped to the APC.

However, while the speaker of the state House of Assembly, Hamisu Chidari was giving his speech, some supporters started exchanging blows, forcing some others present at the scene to scamper for safety.

The organizers were however able to bring the situation under control and the rally progressed as planned.

Meanwhile, former Ekiti Governor, Segun Oni has said his political opponents are trying to blackmail him ahead of the Ekiti 2022 governorship election.

Segun Oni disclosed this through his campaign Director-General, Yemi Arokodare.

He accused his rivals of spreading reports that he is plotting to share political appointments before the governorship election.
The DG noted that Oni’s track records, tradition, and political philosophy was beyond sharing offices.

FROM A LAWYER TO A TAILOR : THE INSPIRING STORY OF ABA POPULAR TAILOR...