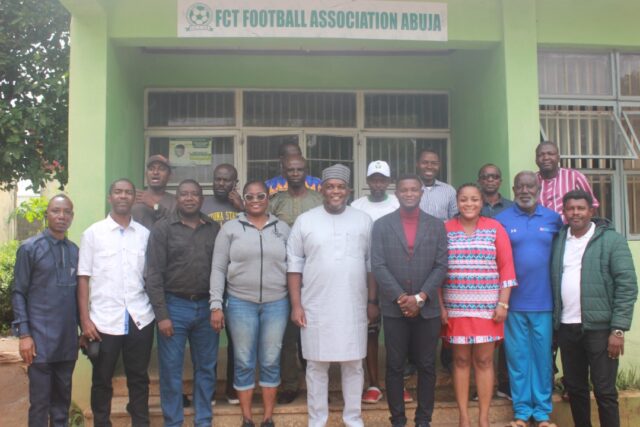 The digital chairman, while speaking during a courtesy call made by the Comrade Bunmi Haruna led newly elected SWAN FCT EXco, also promised to send some sports journalists abroad for refresher courses.

“We are extremely thrilled that such a gentleman like Bunmi Haruna has emerged and I am pretty much sure that the process was free, fair and transparent and that’s why I have not heard any rancour. So, Bunmi congratulations not only for your victory as chairman but having these set off very important personalities in sports in your ExCo,” Mouhktar said.

“We want to create a critical relationship with the FCT SWAN that will enhance sports development in the territory and beyond.

“I believe that the SWAN Awards is prestigious and we will be glad to partner with you to resuscitate it.

“I also want to use this opportunity to say I’ll like to partner with you to train journalists. It could be at home or on the continent. We are ready to help train journalists to better their trade.”

The dynamic youthful administrator , who is also celebrating his two years in the office, used the opportunity to enumerate some of his laudable achievements since he took over the running of football in the territory.

“From day one, the expectations were high, many people were waiting to see what we will do. For the first time in FCT, we sponsored 50 coaches to coaching courses.

We did seminars for referees and coaches in health. We did the U-15 Area Council tournament, organized the FCT League which was adjudged the best, even Lagos agreed it was the best, because it was live on TV,” he added.

“We brought Bayern Munich to Abuja with the Bundesliga trophy and they conducted a coaching course for coaches in the territory. We attracted a Federal Government project, the Bwari stadium which is under construction. For the first time we had the Area Council elections.”

Totori News - January 21, 2021
0
Nigerian football was again thrown into mourning on Thursday after news broke of the death of former Nigeria senior team goalkeeper and...