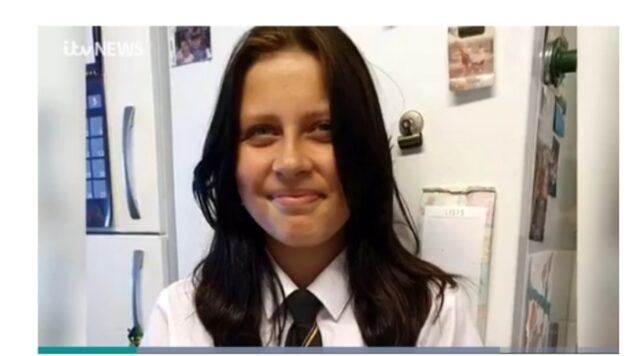 The family of a 15-year-old girl from Portsmouth who died after testing positive for Covid-19, is urging other teenagers to protect themselves with a vaccine.

Jorja Halliday died at the Queen Alexandra Hospital on Tuesday, the day she was due to have her own jab.
She only didn’t, because she’d been isolating having tested positive for the virus four days earlier.

Today her aunt, Lucie Atkins, and younger sister Julie, paid tribute to Jorja, saying they wanted to raise awareness of the dangers of Covid, and encourage other teenagers to get vaccinated:

“As part of Jorja’s legacy,” Lucie told ITV News, “if we can help save someone’s life, then we know that her death wasn’t in vain.”

Jorja’s mother, Tracey Halliday, 40, said that the GCSE student at The Portsmouth Academy was a “loving girl”, a talented kickboxer and an aspiring musician.

She said: “She was a loving girl and she had lots of friends.

“Growing up she turned into a beautiful young lady, always wanting to help others, always there for everybody.”

Her kickboxing coach Sohail Chowdhary said today the community was at a loss to understand what had happened. “She was such a kind and caring person. It’s been such a big shock on everyone.”

Jorja first developed flu-like symptoms before she underwent the PCR test which gave a positive result, leading to her isolating at their home.

She was struggling to eat on Sunday but by Monday she could not eat at all due to her throat hurting.

Ms Halliday said she contacted a doctor who prescribed antibiotics but when Jorja’s condition worsened, she was seen by a doctor who said her heart rate was double what it should be and she was taken to hospital.

Ms Halliday said: “They realised how serious it was and I was still allowed to touch her, hold her hand, hug her and everything else.

“They did allow me that. I’m at the point where I can’t comprehend that it’s happened. I was with her the whole time. They tried to put her on a ventilator to give her body a chance to recover.

“Her heart rate didn’t stabilise. Her heart couldn’t take the strain. They worked as well as I think they could medically but were unable to save her.

She added: “She had the best of care, I know that they did everything they could to save her.”

She said that preliminary results from the hospital’s medical examiner indicated Jorja had Covid myocarditis, heart inflammation caused by the virus.

Ms Halliday said that Jorja did not have any known underlying medical conditions.

Ms Halliday added: “She was going to have the jab on Tuesday.

“But because she tested positive on Saturday she was isolating. When her isolation period was over she was going to get it.