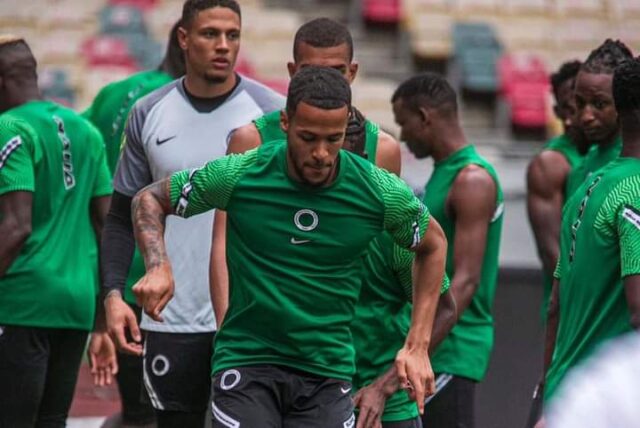 Less than 24 hours to the crucial world cup qualifying game between the Super Eagles of Nigeria and the Wild Beasts of Central African Republic, Nigerian contingent have landed at Douala, Cameroon, reports www.totorinews.com.

Super Eagles are in Douala
The delegation of Nigeria’s Super Eagles touched down  at Aeroport Internationale Douala at 11.28am on Saturday and the team was driven to a Five – Star hotel.

At the airport in Douala to receive the contingent were the High Commissioner of Nigeria to the Republic of Cameroon, His Excellency Gabriel Abayomi Olonisakin and the Consul-General to Douala, Mrs Efe A. Clark-Omeru.

Wet weather in Douala
To the surprise of Super Eagles players, officials and entire Nigerian contingent, it was a wet weather that heralded the arrival of the team and hopefully the cool weather will be active when hostilities begin at Stade Japoma de Douala on Sunday.

The Air Peace aircraft that flew the delegation to Cameroon’s industrial capital was making its first commercial flight since it was acquired by the leading airline company.

Latest on Paul Onuachu
The Genk of Belgium lanky striker was asked by www.totorinews.com if he is fully fit for tomorrow’s game, of which he answered.
“I’m getting better everyday, though I still feel little pain on the ankle, just a little,” Onuachu replied www.totorinews.com in Douala.

No longer ice block on Iheanacho’s right ankle
Super Eagles attacker, Kelechi Iheanacho appears to be getting better as he was no longer seen with ice block tied round his right ankle as witnessed yesterday by yours truly at the Teslim Balogun stadium,  Lagos.

New kid on the block in the Super Eagles, Calvin Ughelumba, who was born in Italy and plays for Glasgow Rangers is the most jovial player in the camp of Super Eagles.

Calvin, who www.totorinews.com learnt is visiting Nigeria for the first time could be heard saying in pidgin language ‘Na so we dey do am’ when the players were having another set of ‘jojo centre ball’ training.

Moses Simon, wing wizard in the Super Eagles is very optimistic that the team will emerge victorious against the Wild beasts of Central African Republic on Sunday.
In a brief chat with www.totorinews.com in Douala, the Nantes attacker says his teammates were unlucky in the first leg  that Nigeria lost.

“We go beat them. I bin think say I don score when I dribble the defender enter dem box 18, but the ball go up. I no believe am. But we ready for them and we go beat them.”

The game is scheduled to begin at 2pm local time Stade Japoma de Douala as football loving Nigerians look forward to the Super Eagles bouncing back to victory.

LOC confident Aisha Buhari Cup will transform the life of the...

Totori News - September 1, 2021
0
At whistle-stop visitations to three eminent personalities and offices in the seat of power, Abuja on Tuesday, Members...