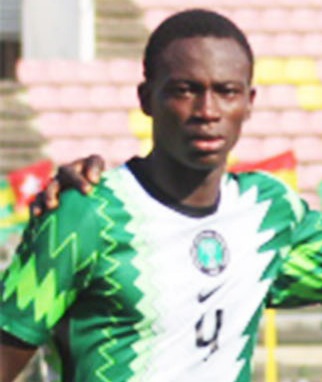 Representatives of some European clubs at the on going U20 WAFU Cup in Benin Republic were thrilled by the performance of Adewale Oladoye in the game against Ivory coast that ended 1- 1 in group b.

It is therefore not surprising that the young energetic and combative midfielder is now the cynosure of the foreign scouts as they jostle for his signature.

Oladoye popularly called “Nigeria’s Patrick Viera”, a product of Water FC Abuja shone like a pure diamond in a game where ten-man Flying Eagles were denied victory with a stoppage – time equaliser.

His accurate timing of his tackles and sublime passes showed the hall mark of a terrific midfielder, as he helped the Flying Eagles to neutralised the deadly attacking moves of the Baby Elephants on several occasions.

The skillful lanky midfielder was the shield playing in front of the central defenders of the team as they thwarted all the pressures piled on Nigeria U20 after they were reduced to 10-man.

Despite the interest shown by these foreign scouts and discussion already going on with the player’s representatives, it is hoped that Oladoye will remain focused in the task of ensuring that the Flying Eagles gets the desired result against Ghana on Wednesday

Mbaka has found another political ally, says APC, threatens to expose him