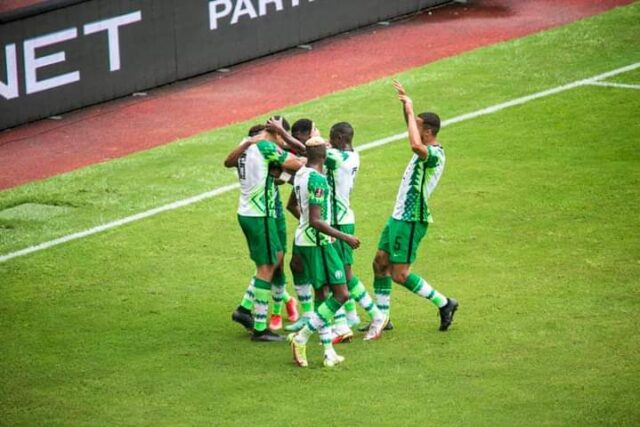 Super Eagles of Nigeria and Indomitable Lions of Cameroon are lodged in the same Best Western Hotel in Douala and it has been a sort of friendly conversations between players of both teams.

Meanwhile, Cameroon later left the hotel to train on Sunday morning as they prepare to tackle Mozambique in the reverse fixture on Tuesday.

“Central African Republic only requested for 200 people to be present for the game, but NFF is still making efforts to get this sorted out.

Only 20 tickets for Nigeria

It is very shocking to know that Nigeria only have 20 tickets for this game as informed by Shehu Dikko, 2nd Vice President, NFF.

“It is difficult that only 20 tickets have been given to Nigeria. NFF President, Amaju Pinnick is in touch with the relevant authorities to resolve this problem,” Dikko said.

Nigerians should calm down

Chairman of Chairmen in the Nigeria Football Federation, Ibrahim Gusau appealed to Nigerian journalists and members of the Supporters club present to be calm as the NFF tries to settle the matter.

“We should calm down. I was here during the last CHAN in Cameroon. We should be patient with the security personnel,” Gusau said.

“If we become very angry and become unruly, the security personnel may finally have their way. So, let’s calm down.” he said.

They could be seen discussing the matter in groups at the stadium.

Many Nigerians were still denied access into the stadium, but the beautiful consolation was that Leon Balogun and Victor Osimhen scored in the first half and that result stood at the end of 90 minutes to give Nugerians something worthy to cheer after the shocking 0-1 loss in Lagos.

Totori News - February 23, 2021
0
The deadline for registration ahead of the new season remains February 26, 2021, says Mohammed Alkali, chairman of the third tier league...