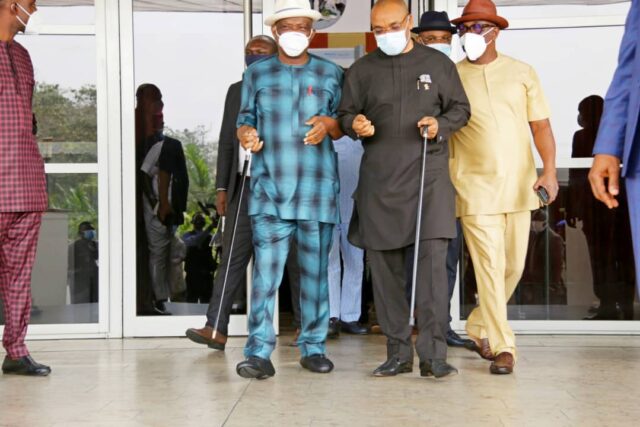 Governor Nyesom Wike of Rivers State on Thursday 21 January 2021 made an urgent visit to Akwa Ibom State government House, Uyo to commiserate with the state following series of sudden loss of prominent sons.

According to the Rivers State number one citizen in an emotional remark said what affects Akwa Ibom affect him.

He described the sudden dead of the Director General of Governor Udom Emmanuel’s two terms campaign organization and Chairman of Pan Niger Delta Forum, PANDEF, Air Commodore Idongesit Nkanga rtd and the
Akwa Ibom State Chairman of the Peoples Democratic Party, PDP, Mr. Udo Ekpenyong, as grave losses not just to Akwa Ibom State but the entire South-South region and the party which, he said, is Nigeria’s hope.

“I came here because Governor Udom has lost two, three prominent sons of Akwa Ibom State, the most painful is the former two times Director-General of his campaign organisation and the Chairman of PANDEF and then his party Chairman which is also my party and the hope for this country,PDP.

Gov Wike is saddened because Idongesit Nkanga’s departure is at a time when he had become a strong voice in the Niger-Delta and been at the frontline of agitations for the restructuring of Nigeria.

Wike assured that Rivers State will be involved in the burial process of late Idongesit Nkanga and Obong Udo Ekpenyong.

Gov. Udom in response said, “for a man to be your two term campaign DG,he must have proven high level of loyal and integrity.”

Our focus is on youth development – Akinwunmi