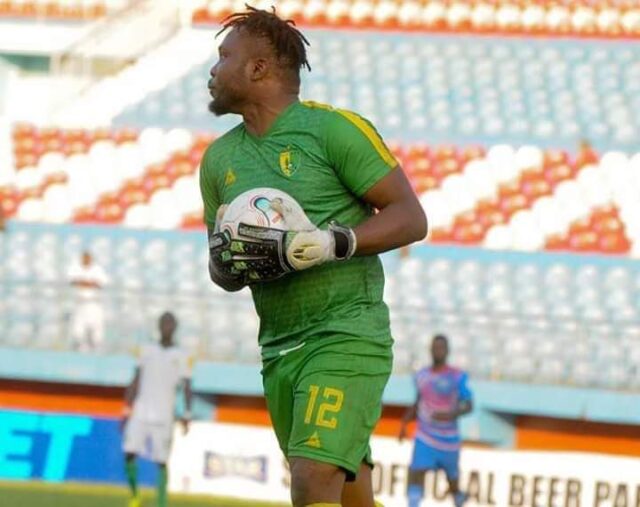 Who else watched this guy against Katsina United at the Muhammed Dikko Stadium, Katsina, this evening? Chinedu Anozie is arguably the best goalkeeper in the NPFL, not just because of what he does with his hands but how comfortable he is with the ball on his feet.

The manner he dropped his shoulders and dummied that onrushing Katsina United attacker would pass for one of the moments of the game.

And of course, the bewildered and stranded striker hacked him down. Imagine, a keeper dribbling an attacker right in front of his goal. An interception would have seen the ball right in the net. But Chinedu calmly pulled this through.

He is never panicky with the ball on his feet. No matter the pressure, he can hold it for as long as necessary just to accurately pick out a teammate. His confidence at the moment is skyhigh.

That is why Plateau United coach Abdu Maikaba doesn’t joke with him. That’s why he is so highly rated in the league. Only a few NPFL coaches play out from the back like Maikaba and Anozie is a key component of this ultra-entertaining pattern.

For the records, despite starting the season battling back from injury, Anozie just notched his fourth clean sheet in five games. Monstrous! So while the legs are dribbling high-pressing opposition forwards, the hands are keeping the balls away from the net. Complete modern day goalkeeper in the mould of the Allison Beckers of this world.

The national team truly beckons for this young man. His consistency over the past three seasons shouldn’t go unrewarded.

WAFU B: Moses still in shock over defeat to Black Satellites

EXCLUSIVE : How I became a truck driver in the United...

Francis Achi - October 15, 2020
0
Many footballers are driven by strong passion for the beautiful game, it is this passion that made them...