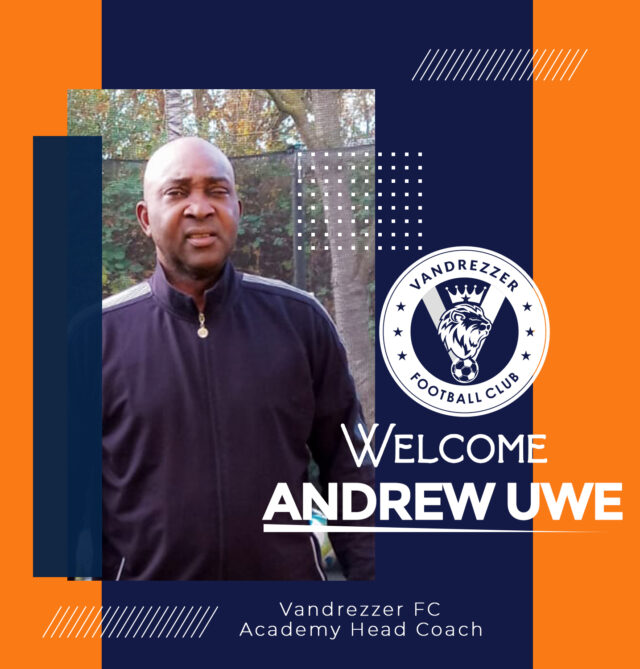 The most digitalised club in Nigeria, Vandrezzer Football Club has appointed Andrew Uwe, Nigeria ex-international as Head coach of the Vandrezzer FC Academy.

Coach Andrew Uwe, a brilliant central defender, was during his playing days, a vital part of Nigeria’s U20 Flying Eagles and the captain of the squad that won the Bronze medal at the FIFA World Youth Championship which held in Soviet Union in 1985.

The prolific central defender also featured in the 1988 African Cup of Nations, where he alongside other team members brought pride to the nation when the Green Eagles of Nigerian won the silver medal in Morocco. He also represented Nigeria at the 1988 Olympic games in South Korea.

Andrew played for several club sides in Nigeria including Leventis United FC, Iwuanyanwu Nationale and Calabar Rover. He furthered his playing career at club side in Portugal, Holland, South Korea, Belgium, and at VFB Oldenburg Germany.  He last played for Houston Dynamo of Texas in the United States before embarking on his coaching career.

The 54-year-old ex-Nigerian international, who currently holds a German Elite licenses as well as the UEFA coaching license, will head the development of the academy, as he will bring to bear his wealth of experience to the academy, having served as an assistant coach at Northwest youth team before he was later appointed as their Manager. He also managed BV Essen, a German Sixth tier club.

Upon assumption of the office, his task would include identifying and raising talents in our academy that may eventually play with the VFC first team, compete favourably for first team spots in elite clubs across the globe but most importantly, to ensure the holistic development of our students and prepare them for the demands of the future.

Andrew who keenly contested for the position against a Spaniard and a Dutch, was unanimously selected by the recruitment panel as the preferred, due to his rich football background as both a player and coach. The recruitment Panel noted that apart from being an excellent coach, Andrew will be a perfect role model for our young players here at the academy.

Speaking on his appointment, Andrew said ” I am excited to be joining a Club with such passionate supporters and visionary leadership. I want to thank the Management of Vandrezzer Football Club for giving me the opportunity to join in building the Academy. We would work together to mentor, impact discipline, encourage the right ethics, values, winning culture and above all, the Vandrezzer way of doing things. I look forward to resuming at the academy within the coming weeks”.

The Lions of Naija are glad to have Andrew Uwe on board and we wish him a successful stay with us.

Vandrezzer FC… won’t walk that road without you!

NFF not in anyway distracted – Pinnick

NRA will not send Referees to Jos, a war zone –...