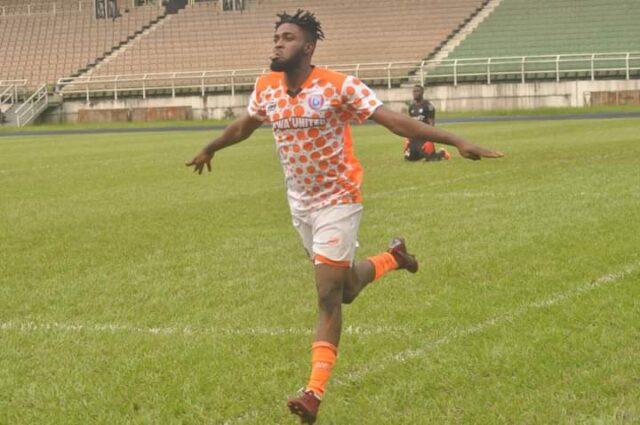 Akwa United moved a step closer to winning their first-ever league title following a thrilling 1-1 draw with Rivers United at the Adokiye Amiesimaka Stadium in Port Harcourt on Sunday.

Charles Atshimene’s 52nd minute opener was cancelled out by Bakari Bamba’s cracking effort two minutes from time as both teams settled for a point apiece on match-day 33.

The results means the Promise Keepers remain top of the log with 61 points from 33 games, three points more than joint second-Placed teams Nasarawa United and Kano Pillars who won against MFM and Dakkada FC respectively.

Coach Kennedy Boboye effected four changes to the starting eleven that defeated Enyimba on match-day 32 in Uyo. Goalkeeper Jean Efala, midfielders Dare Ojo, Ubong Essien, and Adam Yakubu were all listed in the starting line-up taking the places of Adewale Adeyinka, Seth Mayi, Marshall Johnson, and Ikechukwu Nwani for the crucial game against the Pride of Rivers.

The Promise Keepers showed class and determination, and march their hosts toe-to-toe in the opening exchanges. Both sides created good scoring opportunities but couldn’t bury their chances due to some poor finishing and some outstanding saves from both goalkeepers as the first half ended goalless.

The Promise Keepers began the second half on the front foot, and got a deserved lead through top striker Charles Atshimene who followed up a long ball and calmly tucked it in beyond the outrushing goalkeeper to put his team in front with his 12th goal of the season.

The hosts stepped up their game and came close to getting the equalizer but they were put in proper check by a well coordinated back-line marshalled by Sampson Gbadebo, Olisa Ndah, Etboy Akapn and David Philip, while the few attempts at goal were well saved by goalkeeper Jean Efala.

Coach Boboye made some tactical changes to protect his team’s lead towards the end of the game. Akarandut Orok, Nasiru Jibril, Wisdom Fernando, and Charles Okafor were introduced at different times to replace Samuel Amadi, Ubong Friday, Dare Ojo and Charles Atshimene.

Just when it looked like the Promise Keepers will be heading back to Uyo with all three points, the hosts however found their way back into the game with two minutes left on the clock, when Bakari Bamba fired a rocket shot past Efala to draw his team level in the tie.

Despite the late charge by both sides to score the winning goal, the score line remained unchanged at the end of the regulation time.

The draw in Port Harcourt was Akwa United’s tenth in 17 away games, with three wins and four defeats.

With five matches still to be played before the end of the season, Akwa United are enjoying three points lead heading into two consecutive home games against Warri Wolves and Jigawa Golden Stars on match-day 34 and 35.

Ronaldinho in ‘hot soup’ over unpaid taxes in Brazil

ETU RETURNS TO WARRI WOLVES AS CHAIRMAN WITH OFFICIAL VEHICLE