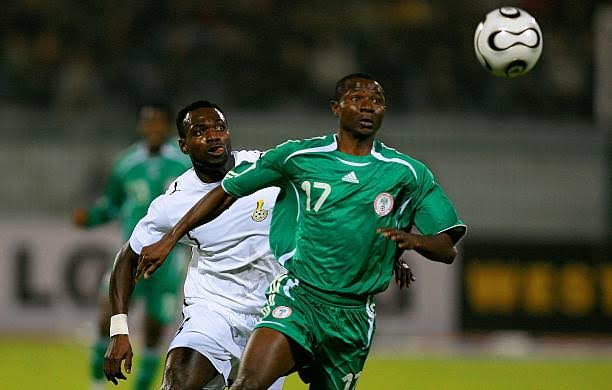 As football loving Nigerians continue to lament the lacklustre display of the Super Eagles under Gernot Rohr, former Nigerian striker, Julius Aghahowa has revealed that the Super Eagles of his days win games from the tunnel, www.totorinews.com reports exclusively.

Aghahowa, who was among the football stakeholders that watched Super Eagles played 1- 1 draw with lowly rated Cape Verde at the Teslim Balogun stadium, Lagos on Tuesday, lamented the poor performance of the Rohr – led team.

He further said, that there was no way during his days in the national team that African teams like Cape Verde, Central African Republic and Liberia would have attacked the nest of the Eagles and not come out with dreaded wounds of being clawed to total defeats.

“The Super Eagles of my time win games from the tunnel. We charged ourselves from the dressing room heading to the tunnel as we file out to the pitch for our games,” Aghahowa told www.totorinews.com.

“From the tunnel, the way Taribo West would shout at players of the opposing teams was enough to scare the hell of them and sent jittery signals all over them, these are some of the ways football games are won and Taribo was very good at that.

“This present Eagles are different. It is painful because the team has very good players that can win games for Nigeria, but they lack strenght of character to really play well and win games.

“Nigeria should not be struggling against a team like Cape Verde. This can never happen during my days in the Super Eagles,” he said.

Totori News - October 14, 2021
0
By Francis Achi, who was in Douala, Cameroon Ahead of AFCON tournament in Cameroon in January where the Super...
AllEscort