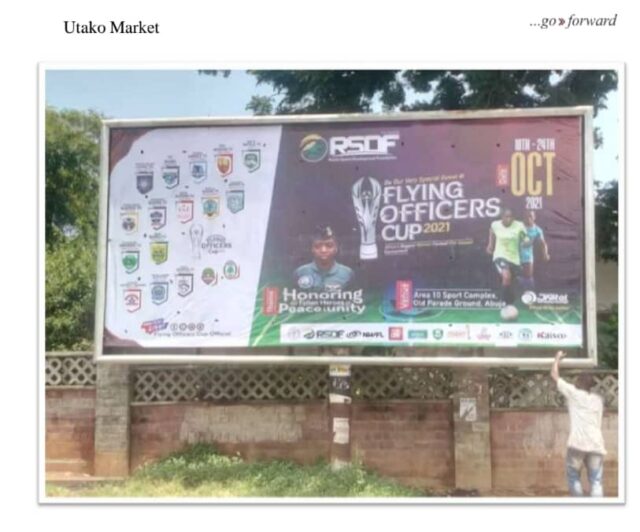 A blitz of brightly coloured billboards of the biggest Pre-season Championship in Africa, the Flying Officers Cup, has perked-up the city of Abuja ahead of kick-off slated for October 10 to October 24, 2021.

As the tournament draws closer, the organisers are gearing up for the women football fiesta.

Abuja, the host city have been spruced up ahead of the tournament with billboards mounted at strategic locations. Expectedly, this has spurred up excitement amongst football lovers in the city and beyond.

Barr. Paul Edeh, President, Ratels Sports Development Foundation said the billboards were mounted at strategic positions to make people catch up with the fun and excitement that the competition brings.

“We have worked so hard over the last few weeks to get this done almost perfectly. The Area 10 Sports Complex, venue of the event, is under renovation and it’s almost 100% done.

“Most particularly, am glad we have been able to get positive reactions from football lovers across the city on the billboards placed in various strategic locations in Abuja.

“Teams that are coming for the Championship are guaranteed a very hospitable reception and would have a very conducive environment to thrive and develop as a team before the start of the new season.

“We are ready for the tournament and waiting for the teams’ arrival. The Flying Officers Cup is not just a competition, it is more like a football fiesta”, he concluded.

Meanwhile, the competition, which would commence, on Sunday October 10, will see 16 teams including a team from Ghana and Benin Republic battle for honours at the Area 10 Sports Complex, Abuja.

The Flying Officers Cup 2021 is the third edition of the women football Pre-season Championship in honour of the late Flying Officer Tolulope Arotile. Edo Queens and Bayelsa Queens are the past winners of the tournament.

Francis Achi - August 10, 2021
0
In a cup final game that most football pundits and fans gave it to Nasarawa United to triumph at the expense of...