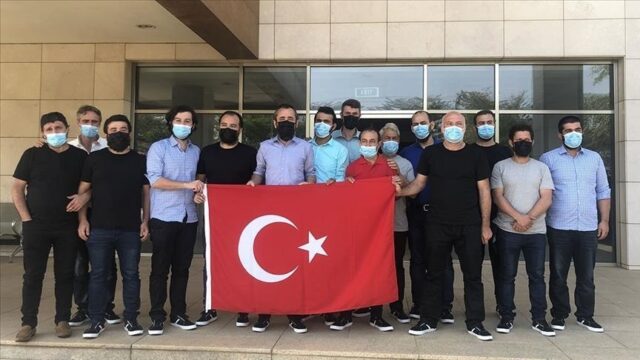 On Sunday, 15 sailors arrived in Turkey after 21 days in pirate’s captivity as the vessel was seized near Nigeria.
At Istanbul Airport, Foreign Minister of Turkey Mevlüt Çavuşoğlu and their families welcomed the sailors.
On Saturday, the members of Mozart vessel crew were transferred under high security to the Embassy of Turkey in Abuja, Nigeria. The crew was saved on Friday.

Captain of Mozart vessel Mustafa Kaya told reporters that the pirates kept the prisoners at the same place with reptiles and dangerous animals.
“We were always under the custody of armed people. But we were not exposed to any physical violence and treatment,” he said.

Kaya noted that the pirates were convinced to release sailors by representatives of Borealis Maritime Company who held the talks.
Another sailor Unsal Dilsiz said one Azerbaijani sailor among them was killed.

On January 23, near Nigeria, the pirates seized the vessel with 19 people on board. 15 sailors were kidnapped as a result of the incident.
After the attack, the vessel anchored at Port-Gentil but only three survived members of the crew were on board. They were transferred to Turkey on January 30. The vessel was guided by Borealis Maritime that bases in London and Hamburg.

Earlier, President of Ukraine Volodymyr Zelensky participated in the meeting with six Ukrainian citizens – crew members of Stevia cargo ship, who were captured by pirates in December 2020. During the attack on the ship last year, the pirates captured six Ukrainian sailors, as well as two citizens of Albania.
The Ukrainians were freed at the end of January 2021. They were taken to the city of Port Harcourt, where they underwent the necessary medical examination, and subsequently were transferred to Lagos and Istanbul (Turkey).