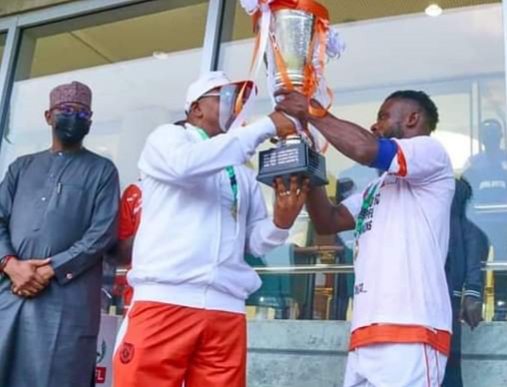 Chairman, League Management Company (LMC), Mallam Shehu Dikko has expressed satisfaction with the just concluded 2020/2021 NPFL season even as he rated it as the best ever league in history statistically.

Dikko disclosed this while speaking at Sports Writers Association of Nigeria (SWAN), FCT Chapter Guest Forum in Abuja. He highlighted the positives from the just concluded season, asserted that the positives far outweighed the negatives people may not have noticed.

He emphasized that Nigeria league club administrators did so well during the pandemic, unlike the leagues other countries where most players took pay cut, NPFL players received their full salaries.

“The last league season recorded impressive statistics better than the previous seasons. The number of away wins recorded (36) was the highest since the LMC took charge as owners and organisers of the Nigerian elite league

“Technically it was the best League, not just in the NPFL history but since the start of professional football league in Nigeria.”

“Commercially it was challenging, but it was the most innovative, because we have brought innovations that people thought was impossible to do before. It was challenging because funds did not come the way we thought it will come.”

“Organizationally it was very challenging because of the Covid 19 and some other issues. When I say it is the best technically, we start looking at the numbers and numbers don’t lie.” the astute football administrator stated

“It is the highest statistics of goals that we have ever had in the league. “

“92 matches where drawn, it is also the highest.”

“Total numbers of penalties awarded this is 81, compared to other seasons where we have over 100 it shows the referees also did well.”

Speaking earlier, FCT SWAN chairman, Bunmi Haruna emphasised the need for the LMC to involve the media more in it’s activities. He also urged the league body to aim for the very best because nothing is impossible.

“We drive football development across the world, so we are partners in progress.”

“It is our desire that our league should be self sustaining, that our clubs win CAF competition glories and have financial breakthrough.”

“We want our league to attract he best players cross the world, we want a Cristiano Ronaldo to one day decide he has to play in the NPFL.”

“These things might look impossible right now, but if we put in efforts, impossible is nothing.” Bunmi enthused.

Dikko promised to have quarterly Interactive session with the media henceforth.